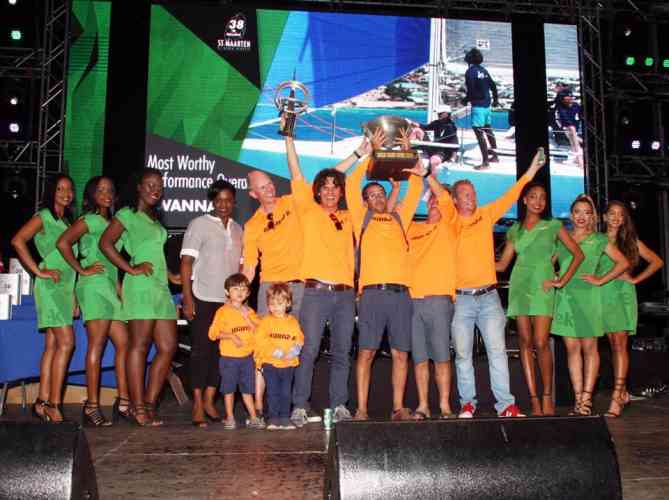 Port de Plaisance — In her very brief remarks when she was invited on stage to assist with one of the very important presentations at the conclusion of the 38th St. Maarten Heineken Regatta, Prime Minister of St. Maarten, Leona Marlin-Romeo told the gathering that the island is open for business.

“Yes, we had a very rough time during and after hurricane Irma, but that did not let us stop there. We are open for business and looking forward to seeing each of you here next year,” she said.

Before leaving the stage, Prime Minister Leona Marlin-Romeo had the distinct pleasure of handing over the ‘Most Worthy Performance trophy overall to Jan Van Den Eynde, the Captain of Wanna B, from St. Maarten.

Wanna B, which finished with a score of (12) competed in the CSA4 class secured three 1st places, a 2nd, 3rd and a 4th. What was a very proud moment for the Prime Minister was also a proud one for Jan Van Den Eynde and his crew.

Island Time Class winner for Friday was Avocation, a Swan 48 skippered by Hank Schmitt from the USA picked up a 1st in race one, 5th in race two and 2nd in race three. The island time winner for Saturday was Caribella, a Charger 33 with Gordon Robb from St. Maarten and the winners for the final day was our very own, ‘Kids At Sea’ on Moondance, a Catalina 36, manned by Rien Korteknie from St. Maarten.

The Sol Cup for the fastest non-spinnaker on Friday was presented by David Antrobus to Rick Gormley from Antigua, the captain of Elethea, a First 38. The cup for the most worthy Swan was presented by Lucy Jackson of Performance Yacht Charter to Tomek Ulatowski from Poland on Varsovie, a Swan 100.

KHS&S Contractors, a Dafour 44/Dream Yacht Charters with Mike Cannon and Neil Harvey from the USA picked up 5 points. Kraken Beers with Dirty ‘Oars, a Benneteau Oceanis 45/Moorings 45.3, with Russel Bertrand from Canada had 17.5 points and Koenig Ludwig and Karl Haist aboard a Sunsail 41S3E from Germany had 22 points.

Avanti, a Hanse 430 with Jeremi Jablonski from the USA, 9 points, Blue Fin, a Jeanneau 54 DSA with Rodney Dodd from the United Kingdom, 10 points followed by Out of Africa, a Beneteau Oceanis 45, with Hans van Mameren from St. Maarten, 17 points.

Lazy Dog, a Melges 32, with Sergio Sagramoso from Puerto Rico, 6 points, Kick em Jenny 2, a Melges 32 with Ian Hope Ross from St Maarten, 11 points and Taz, a RP37 with Bernard Evan-Wong of Antigua and Barbuda, 13 points.

WOW, a Stelth 14 GT with David Liddel of the United Kingdom, 4 points, Morticia, a Modified Sea Cart 30, with Dale Mitchell from Australia, 6 points and Arawak, with Jobert-Nivalt a 52, Adventure Sports Sailing from St Maarten, 9 points.

Akouavi,a Pogo 12.50 with Chris Swallow from the United Kingdom, 4 points, Loose Fish, a Class 40 with John Niewenhous from the USA, 6 points and Esprit Scout, a Class 40, with Marc Dubos from France, 9 points.

Team Goldon Dog was awarded the trophy for charity sailing and the St. Maarten Youth Challenge Trophy for the best sailing team was awarded to Tryst.

Photo caption: Prime Minister Leona Marlin Romeo joins the jubilant crew of ‘Wanna B’ from St. Maarten, the winners of the Most Worthy Performance overall in the 38th St. Maarten Heineken Regatta. Photo by Milton Pieters.