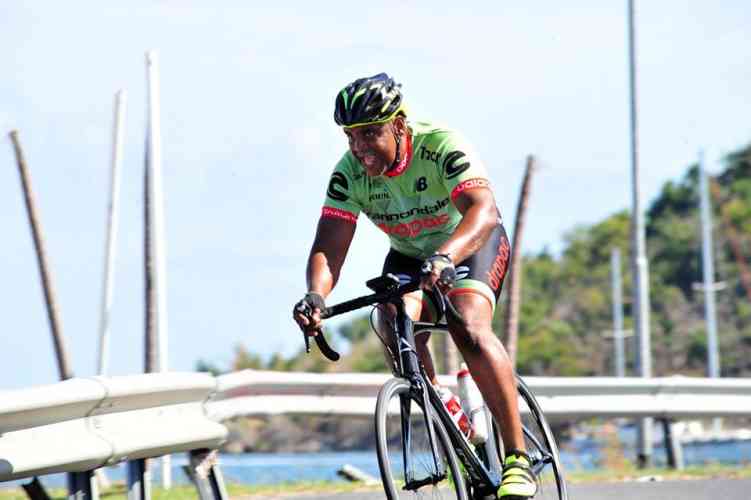 Great Bay — The just concluded Post Irma Survivor Road Race which took place Sunday morning, March 25th, 2018, was not intended to serve as a reminder of the bad experiences of the devastation caused by hurricane Irma. Instead it was a way of demonstrating that the hunger to be still competitive was very much alive in a post-Irma environment.

The four category event which was organized by MO Trouble Cycling Club in collaboration with the St. Maarten Cycling Federation (SMCF) attracted quite a gathering in the vicinity of the western end of the Causeway bridge.

There were intervals between the starts for each category but despite the fact that they all had to ride along a specified course, the amount of laps varies from between 4 to 8 and it did not come as a surprise when those in the senior category had to overtake those who had left before them.

The organizers made it easy for the race officials to identify the riders in the groups by equipping them with color coded numbers and even when some riders bunched up, it did not pose a problem.

Those in the (Playboys) category involving eight riders were the first to complete the circuit four times. Rumini Rogers (in the above photo) who was able to distance himself from the rest of the pack turned out to be the eventual winner in that category. Occupying the number two slot was Wim Van Buul followed by Paesa Monoz.

One dozen riders faced off in the Masters category, the most recognized of them was Mark Maidwell, Ronan Garnier, Dick Luttekes, Bienvenido Papi Carty and Blade Carty. That turned out to be a battle of the fittest as the race progressed.

But coming down to the wire, it was Maidwell (see photo above) crossing the line unchallenged followed some distance behind by Garnier and Papi Carty. It was later learnt that Blade, who would have been a strong contender for a podium place fell during the course of the final lap.

In the battle among the four women, Annelies Starreveld (see photo above) returned to her winning form when she also crossed the line unchallenged after covering the circuit four times. Sharon Bredl, age 60, was second, followed by Susy Piscione.

In the senior category, Dedou Benitez (see the above photo) demonstrated that he too was in form when he took the top honors in his event. Occupying the number two spot was an aspiring young rider Kianny Noel followed by Danny Laud from Anguilla.