Home Local News To write or not to write…. about the dump fire again 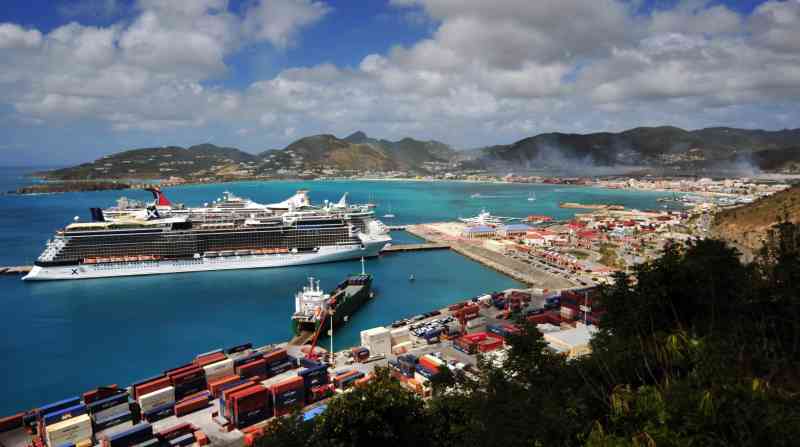 The news about the advice not to call and the decision to still dock are facts. We have the press releases to prove it. We also have a photo of the Fascination in port at the Pointe Blanche cruise terminal, as can been seen below in this publication.

This whole affair is worthy of a column. Interesting enough, right? “To call or not to call” would be the working title. Our opinion is that Carnival Cruise Lines can not afford to mess up their schedule by not calling on St. Maarten for a simple dump fire. They run the risk of cruisers cancelling their booked cruise trips that involve St. Maarten if the word got out that things are so bad on St. Maarten that even the cruise ships are avoiding the island because of the dump fires. They can’t afford that kind of negative publicity.

Then the question remains, can StMaartenNews.com afford to publish such a negative story and still spread news that the St. Maarten Government, the Port authorities and the Cruise Lines are obviously trying desperately to avoid spreading? And that is the crux of the matter.

The constant smoldering dump fires have become the new norm on St. Maarten and the emanating smoke seems to be becoming acceptable amongst the people. We have often written that on St. Maarten we often quickly accept what is common or common practice as normal.

But is a highly toxic dump fire and smoke normal? No, of course not! And we should not accept it as a normal part of our every day lives here on St. Maarten. It is killing us, albeit a slow death for most of us, but it is most definitely negatively affecting our health and therefore ultimately our lives.

So by addressing this topic, StMaartenNews.com hopes to put pressure on officials in government, the port and cruise lines industry to address and solve the dump issue on St. Maarten once and for all.

Just yesterday, one of our readers wrote in and ask why we are not writing about the dump fire and smoke, since it has been smoldering for more than a week now. The initial reaction was why write about it? In the past, all the writing we did achieved absolutely nothing. Nul comma nul. And like we recently saw in a Facebook post, “nul komma nul is still nul”.

But when you wake each morning with the smell of smoke in your bedroom, you can’t ignore this fact and once again, here we are writing about this topic. One of our readers happened to be a legal mind and reminded us of the plan back in the day of the then public prosecutor Hans Mos to criminally prosecute the authorities and the dump management officials for environmental crimes (‘milieudelicten‘).

Maybe this what is needed to be done. Judicial action taken by the Public Prosecutors’ Office against the authorities. Because obviously the government is not taking any action. No consideration for the people living around the dump areas under the smoke, the children, the sick and the elderly. Whenever there is a dump fire, the government is the first to shut down the government administration building and send home the civil servants to avoid the toxic smoke. But what about these who live in the areas and are getting the smoke full on into their homes, where can they go?

Even when the smoke from the thick black fumes are hanging like a smog over the Cul-de-Sac valley, over the Cay Hill valley – even over the hospital – officials are joyfully celebrating the opening of the Rockland Estate on top of Sentry Hill, as a tourism product the island badly needs in order to recover in a post-Irma era. However, none of these officials are saying let’s get our priorities straight and before a next hurricane season comes around or a next tourism attraction is opened on the island, let’s tackle the dump situation once and for all.

Nope! Not one iota of concern.

Public exposure of this lack of care or concern on the part of government officials – not even on the part of members of Parliament who are elected nota bene to stand up for the (health concerns of the) people – nor even on the part of the port and cruise officials who stand to benefit economically from a smoke-free environment on St. Maarten – has to be done in order to bring the plight of the island on the forefront of everyone’s mind, both locally and internationally.

So there you have it again, another article about the dump. Any one reading? Honk your horn if you are and you care.