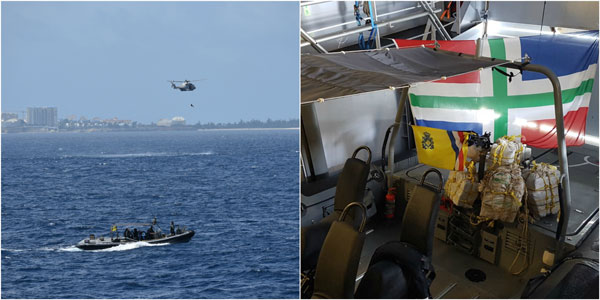 PHILIPSBURG – The Dutch Caribbean Coast Guards intercepted a go-fast boat early Saturday morning. A press release from the Coast Guard states that the The operation started on Friday July 15th during the evening when the Dutch Naval Vessel stationed in the Caribbean, the Zr. Ms. Groningen, spotted a go-fast boat traveling without lights heading towards St. Maarten at high speed. The Coast Guard began chasing the vessel and just after midnight the FRISC vessel from the Zr. Ms. Groningen intervened and they intercepted the boat where they found the two crew members, now suspects and an amount of 128 kilos of cocaine. During that time one of the occupants jumped into the waters, he was captured by the coast guards, he claimed he was going to fish with four other friends and their boat sank. At the time he was captured he was completely naked and told investigators that his leg was injured and that he came from Venezuela. Despite doubts the Coast Guards still searched to see if they would find anyone that drown and the boat the man claimed sank but the coast guards came up empty handed, thus the Coast Guards arrested the two crew members and the man they rescued at sea and turned them over to the police. The investigation is ongoing.