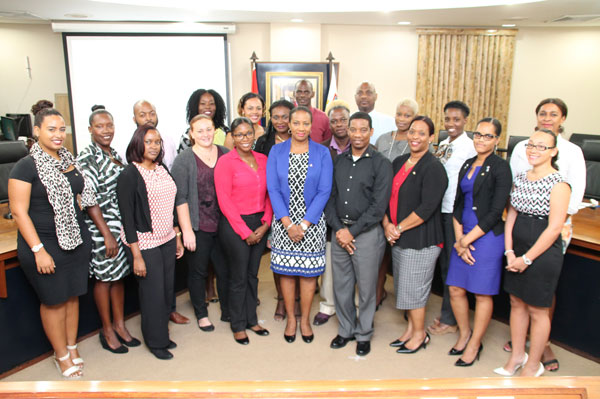 PHILIPSBURG:—- On Tuesday, July 12, 18 civil servants were sworn into the Ministry of Education, Culture, Youth and Sports during a ceremony held at the A.C. Wathey Legislative Hall. The 18 civil servants were sworn in by Honorable Minister of Education, Culture, Youth and Sport Silveria Jacobs, in the presence of Secretary General Jorien Wuite and various Department/Division heads.
Minister Jacobs congratulated the civil servants after the ceremony, explaining that the power of the oath comes for those who takes it. If a person is honorable, they will heed by the oath they have sworn to uphold. She continued to state that St. Maarten is counting on you to not only be professional, but to have high moral and ethical standards while working with integrity in a transparent manner.
The Ministry encourages these civil servants to continue to work hard in their functions and be a leading example not only to their colleagues, but the youth of St. Maarten as well.