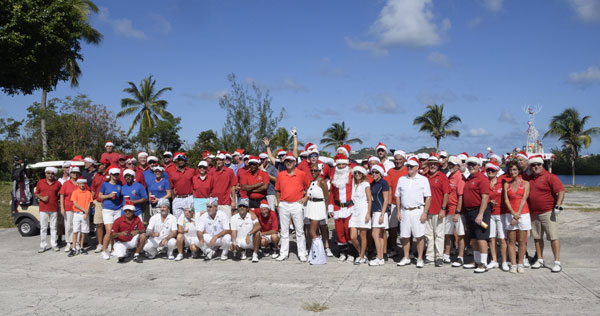 This Santa Scramble tournament is organized by the St. Maarten Golf Association and was again a tremendous success. This year the event was enjoyed by 18 teams of four players each.

After a fierce battle and lots of fun the winner of this year’s Santa Scramble was the team of
Odom, McCauley, Snyder and Rubano who ended the 18 holes stroke play event with a total score of 55 low net.

Second prize was won by the team of Struthers, Heilmann, De la Salle and Gurr. Third prize was won by van der Waart, van Iersel, Da Costa and Carter. Both teams scored a 60 low net but Struthers and his team of the inebriated had a higher handicap.

After the tournament, all players enjoyed the after party at Bar Code Restaurant & Bar in Cupecoy. During this event awards were also presented to annual winners of the 2016 Overall Monthly Medal Plays and to the finalists of the Club Championship 2016 named the Thomas Smith Challenge Cup.
This year Jesus Rivera was crowned Club Champion 2016 with Keith Graham coming in as runner up.

Medal Play Awards were as follows :

A special thanks goes out to all our sponsors and contributors that helped this fundraising event a huge success as well as all the volunteers and players that participated on this beautiful day.

The SMGA is a non-profit organization that welcomes all beginning and experienced golfers, tourists and St. Maarten / St. Martin residents alike to become members and join them during tournaments and matches. For more information about the SMGA, please contact the Golf Shop at the Mullet Bay Golf Course or like us on Facebook: https://www.facebook.com/St.MaartenGolfAssociation
Website : www.sxmgolfassociation.com