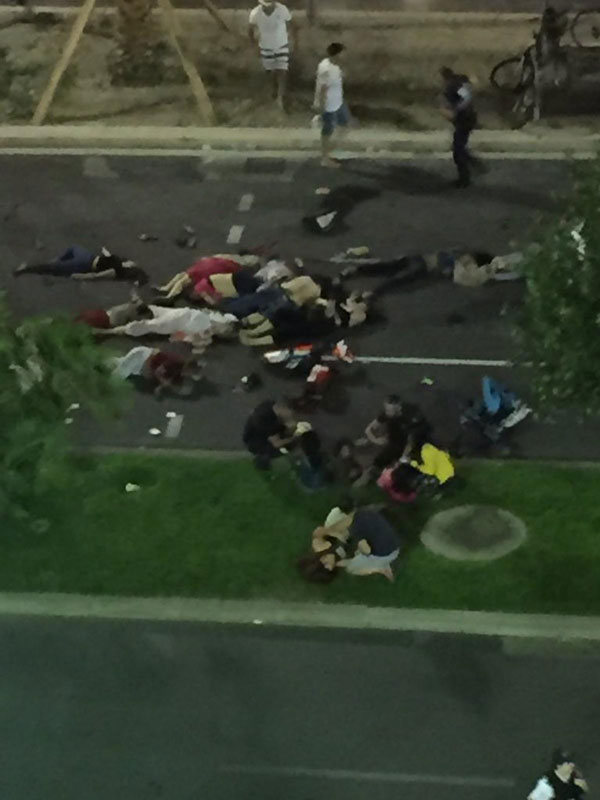 Paris (NICE):– A truck crashed into a crowd of revelers Thursday night during a Bastille Day celebration in the southern French town of Nice, killing at least 60 people and wounding dozens of others.

The celebrations quickly turned to chaos as the truck rammed into a crowd at the Promenade des Anglais during the end of a fireworks show.

The driver was shot dead by police, said Pierre-Henry Brandet, a spokesman for French Interior Ministry.

Sylvie Toffin, a press officer with the local prefecture, said the truck “hit several people on a long trip” down the sidewalk near Nice’s Palais de la Méditerranee, a building which fronts the beach.
She confirmed the incident was deliberate.

Some witnesses said the truck zig-zagged through the massive crowd, aiming at people as they ran from the carnage. “Everyone was calling ‘run, run, run, there’s an attack, run, run, run,’” an eyewitness told BFM-TV. “We heard some shots. We thought they were fireworks because it’s the 14th of July.”

Another witness said the truck accelerated as it mowed into the panicked mass of people. The driver then exited the cab with a gun in hand and started shooting.

“There was carnage on the road,” Wassim Bouhlel, a resident of the resort city told the Associated Press. “Bodies everywhere.”The large box truck plowed into a gathering at the Promenade des Anglais just after a fireworks display around 10:30 local time, local newspaper Nice Matin reported.

Photos published by the newspaper at the scene showed a white truck with bullet holes in its windshield surrounded by armored police officers.

An Agence France-Presse reporter said the incident took place as the firework display was ending, saying that “we saw people hit and bits of debris flying around.”

“Movement of panic!!” one Twitter user wrote above a video of people moving quickly through the streets.

Other videos and pictures of the aftermath posted on social media appeared to show dead bodies in the street.

Bastille Day commemorates the storming of a prison during the French Revolution in 1789.

“Dear Nice, the driver of a truck appears to have made dozens of deaths,” Estrosi said in French, according to a translation. “Stay for the moment to your home. More info to come.”

It wasn’t immediately clear whether the attack was an act of terrorism.