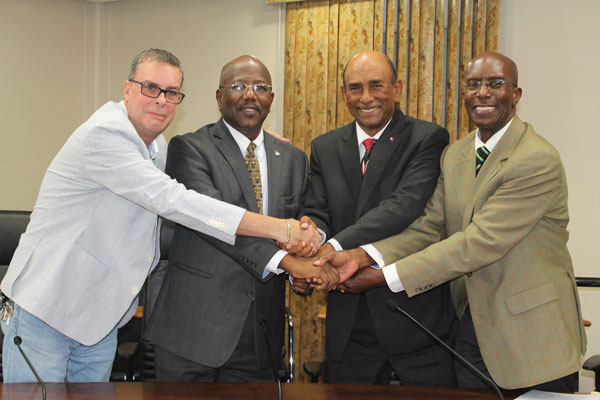 St. Maarten owed NAF 165M to both entities — Parties agree to reduce the amount — Building sold for NAF45M while another NAF15M have to spent on finishing it.

PHILIPSBURG:—Minister of Finance Richard Gibson Sr. told members of the media on Friday afternoon that he managed to reach an agreement with both APS and SZV on the outstanding debts the country owes both institutions. Minister Gibson said that St. Maarten owed the two institutions some NAF165M and he managed to get both entities to reduce their claims in order for the country to come to agreement on paying off its debts based on is required by the CFT prior to them approving the country’s budget. Minister Gibson said St. Maarten was able to comply with that specific requirement and gain control over the amount of monies owed to the two organizations.

The Minister of Finance made clear a number of times that the negotiations did not go without growing pains that government had to end up selling the Government Building on Pond Island along with the land. The agreement signed on Friday was to transfer the building to SZV in order to decrease the debt. He said part of the monies will be paid to APS in order to reduce their claim from government. Minister Gibson said part of the agreement allows government to buy back the building when the government of St. Maarten gets its finances in order.
Gibson he had to pledge that the monies St. Maarten will get from the assets of the former Netherlands Antilles will go towards both institutions to further pay off the debts owed by government. The Minister of Finance felt government have reached a milestone, because just weeks ago it seemed as though it was impossible task to resolve this major issue which was an impediment in getting the CFT to approve the country’s budget. Minister Gibson said with the agreement signed on Friday the CFT can no longer disapprove of the country’s budget after parliament passed it. He said in his view government now has its debt with SZV and APS under control and in three years-time the debt will be completely paid off to both institutions.
The Finance Minister further explained that government will rent the building back from SZV at a 6% rate on the value of the building, while SZV will complete the construction of the building, furnish it at an additional amount which would be added to the current debt. He said that the 6% will give government a substantial reduction in the amount of rent they are currently paying for the other buildings they are renting outside of the government building. He said that all the departments will not be able to move into the building when it’s completed. However, he made clear that government is paying NAF1.2M monthly in rent but when the building is completed government will only be paying between NAF 3 to 4 hundred thousand monthly.
Prime Minister William Marlin, thanked the Minister of Finance for a job well done with the negotiation while he thanked the Minister of Public Health Emil Lee who was not present at the signing ceremony who gave the interim director of SZV the green light to go ahead with the signing. Marlin said now that the signing is completed he is now in charge of ensuring that the building is completed, therefore he will be working with SZV in order to ensure that the building is prepared and furnished according to government likeness.
He said when the building is ready his Ministry will then prepare the moving in plan. He said that he is hopeful that the building will be ready for occupancy by end of August or September, even though he would have liked to have it ready by July.
Marlin also admitted for giving the government building several names such as the ‘white elephant” and the most expensive chicken coop. But soon enough the government building will be the most beautiful building in Philipsburg.