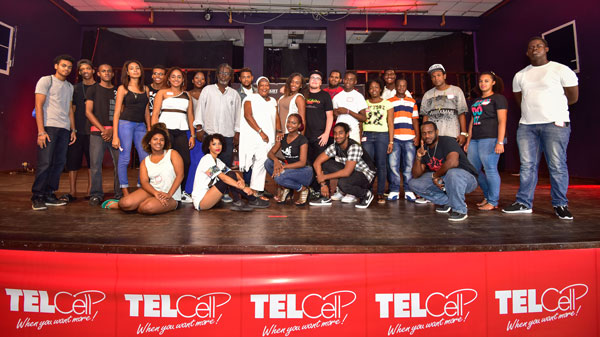 Pond Island:—  The elections are over and it’s once again time to focus on St. Maarten’s #1 Youth talent search competition – TelCell Breakthrough.

Promotion of the event went on the backburner in recent weeks due to the run-up to the elections, but organizers say now that the elections are over, everyone’s attention should be on the island’s youth – and what they can do.

TelCell Breakthrough performers shared some time on the beach recently in preparation for the bit night at the Theatre Royale, Maho, this Saturday.

“The contestants are rearing to go. They have all been training very hard to produce another fantastic night at the Theatre Royale in Maho, for their families, friends and entertainment lovers,” said co-organizer of the event, Angel Richardson.

“We had a hiccup with the sending of messages at one stage so anyone who couldn’t vote should try again,” continued Angel.

The annual show is co-organized by Berteaux “Mr Rudge” Fleming of Xtratight Entertainment who said Saturday’s acts will be in the categories of Instruments; Urban dance; Vocals, Rapping, Dance Technique and Rare talents (which includes a fire dancer and comedy theater)

“Many of the performances are very polished and they will be another big hit,” said “Mr. Rude.”

He is urging anyone who has not yet bought a ticket for the show to do so today (Friday) before they are all sold out.

“Music fans can take a chance of paying at the door, but once the tickets are sold out that is it,” he said.