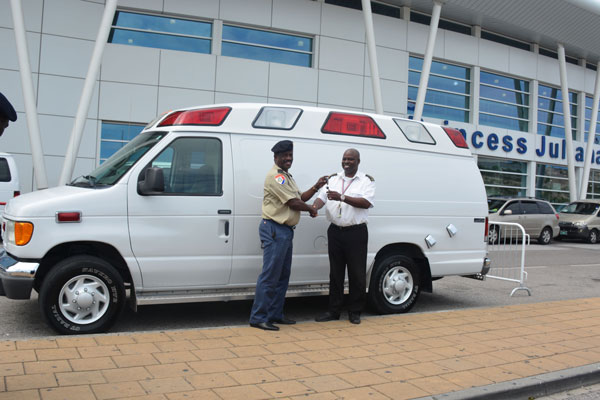 SIMPSON BAY:—The Princess Juliana International Airport, SXM, recently donated an ambulance to the Voluntary Korps of Sint Maarten (VKS).
Manilo Penijn, Manager of the Rescue & Fire Fighting Department of SXM, handed over the ambulance, formerly owned by the department to the VKS.
Commander Tony Rogers, who accepted the donation on behalf of the VKS, praised the SXM Airport, stating that the VKS, as a non-profit organization, depends largely on contributions from individuals and the business community.
The organization has been in urgent need of an ambulance to execute its activities
and the donation, therefore, was a huge relief, said Commander Rogers.
Having recently acquired new and upgraded equipment, including a new ambulance for our Rescue & Fire Fighting operations, we thought it appropriate to donate the former ambulance to the VKS, said Larry Donker, Deputy Managing Director of SXM Airport.
“Our donation is in keeping with the company’s corporate social responsibility. We recognize the efforts of organizations such as the VKS and the role they play in our community. With the hurricane season upon us, it is imperative that they have the necessary tools to serve this community when called upon for assistance,” said Deputy Managing Director Donker.