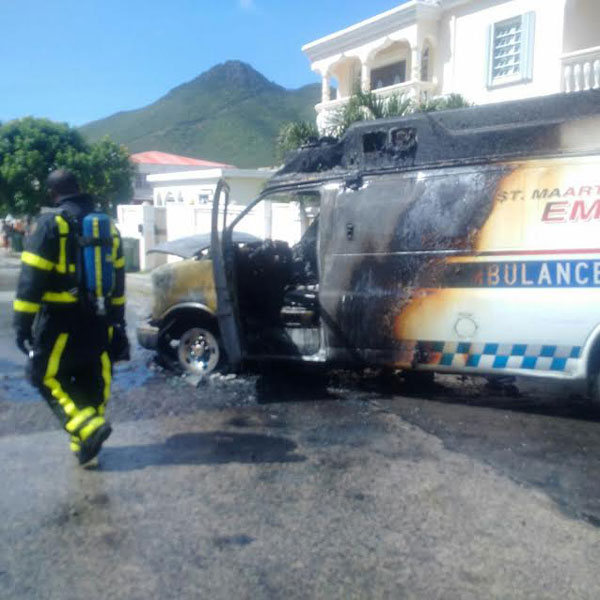 PHILIPSBURG:— An ambulance exploded while leaving the PSVE Academy School located in Ebenezer.
Photographs sent to SMN News by bystanders show that the ambulance caught fire in the front area and eventually exploded. Bystanders stated that there were at least two explosions when the fire inside the ambulance, while the fire started in the engine area of the vehicle.
SMN News learned from well-placed sources that the Ambulance that exploded on Thursday was at Bosh Brakes for full service, which already raised concerns at the Ambulance Department and other departments that are currently investigating the explosion of the ambulance.
SMN News further learned that the fire department responded late causing the vehicle to fully burn and the explosions.
SMN News learned that while there were two explosions while the vehicle was on fire no one from the police department did not respond to the scene to conduct an official investigation to start a forensic investigation.
Police Spokesman Ricardo Henson confirmed that the ambulance went to the PSVE School to pick up the security guard that fell ill at the school. Henson further explained that while the ambulance was reversing the occupants noticed smoke emanating from the vehicle so they drove away from the area. He said the vehicle then caught fire.
Asked if anyone including the ambulance personnel was injured, Henson said that no one was injured and that the patient was not yet inside the ambulance.
Efforts made the contact head of the Ambulance Department Clyred Richardson for an official comment on the explosion proved futile, as soon as Richardson is reached this article will be updated.
However, bystanders who witnessed the incident stated that the ambulance exploded and it was not a regular fire.

Ambulance caught on fire while responding to an Emergency Call

An Ambulance vehicle L-152 (unit 4) caught fire in the vicinity of Ebenezer on Thursday morning. In the report issued by the Head of the Ambulance Department drs. Cylred Richardson, the Ambulance responded to an emergency call for a security guard who fell ill at the St. Maarten Academy PSVE.

The ambulance driver reported that while awaiting the arrival of the Fire Department, he heard a bang (explosion) and about 5 – 10 minutes thereafter a louder bang from the ambulance that was ablaze.

The patient was transported to SMMC with the second ambulance and crew for the emergency call that was requested initially.

Head of the Ambulance Department Cylred Richardson said that the Ambulance has been serviced regularly, and was put back into service just yesterday after being serviced. He also indicated that the incident will be investigated by the relevant authorities.