PHILIPSBURG:— The early elections called by the Governor St. Maarten, when it was requested by former Prime Minister Marcel Gumbs, did not change anything for St. Maarten, instead it opens the door for more instability. Another very unfortunate situation the election called on September 26th created was vote buying by at least one particular political party who also even refused to comply with the laws laid down by the Minister of Justice. Voters were speaking openly how much they were paid for their votes, while some persons posted photos of the monies they received for their votes on Facebook.

The streets of St. Maarten was covered in green, supporters of the green party also piled up at the polling stations as they woo voters to vote for them even when the Minister of Justice issued an MB that clearly stated that supporters of political parties must stay at least 200 meters from each polling stations. The only polling station that implemented the rules set down by the Minister of Justice was the one at MPC, manned by a female officer who ensured that supporters of political parties did not disturb the peace at that polling station. However, Belvedere community center and several other polling stations had no control as the green party members converged in front of the polling stations in order to secure the votes they wanted. Despite the law not upheld Election Day was incident free.
It is clear that the voters on St. Maarten are fed up and has lost confidence in the electoral system and those that are representing them. Of the 22, 302 registered voters that could have cast their votes on Monday only 14856 persons headed to the polls meaning that 7,446 persons simply did not vote. The quota was 966 votes needed to earn a seat, there were 373 invalid votes. It is clear that many of those persons who went to vote either wrote on the ballots or purposely cast an invalid or blank vote leaving 14,483 valid votes.
Even though the number of registered voters increased from 2014, only 67% of the voters headed to the polls compared to 69% in 2014.

In this parliamentary election, there were nine political parties, UPP, DP, NA, USP, OSPP, PPA, SDM, HOPE and SMCP. Of the nine political parties that contested the election, five of them did not earn a seat based on the preliminary results given out early Tuesday morning, SMCP was close but still did not make it, SDM, OSPP, PPA, and HOPE also did not earn any of the seats in parliament, but they managed to spill the votes up well.

The United Peoples Party won 3 seats outright from the 4,127 votes they earned, while they got two residual seats, giving them a total of 5 seats. The National Alliance also won three outright seats with the 3783 votes while they also got the first and last residual seats, giving them 5 seats. The USP won two seats with the 2,796 votes they earned while they also got one residual seat, the DP also won 1 seats with the 1,810 votes, and the DP also got one residual seat. (UPP-5/NA-5/USP-3 DP-2) The results certainly did not leave any of the political parties happy neither their supporters as people simply did not show up in Philipsburg to witness the election results. The leaders of the political parties also did not show their faces and did not answer their phones. Either those that postulated for the election was busy evaluating the outcome of the elections or they were busy forming a government.

Leaders of at least two political parties namely the National Alliance and the Democratic Party has a lot to reflect on because their number two candidates got more votes than they did, this year Silveria Jacob got 3 votes more than her party leader, Jacobs got 778 votes while William Marlin got 775. In 2014 deputy leader of the National Alliance did earn more votes than her party leader William Marlin but this time around Emil Lee captured 667 voted compared to 444 by his party leader Sarah Wescot Williams.

The landscape in Parliament already changed since a new face will be coming into Parliament from the USP, Chanel Brownbill out run Maurice Lake, coming in from the USP are Frans Richardson, Silvio Matser and Channel Brownbill, while the National Alliance has William Marlin, Silveria Jacobs, Christopher Emmanuel, Rudolph Samuel and Hyacinth Richardson, from the Democratic Party will be Sarah Wescot Williams and Emil Lee. The UPP has Theodore Heyliger, Franklin Meyers, Sidharth Brijlani, Jules James, and Claret Conner. One thing for sure is at least three of the ship jumpers did not get enough votes to even piggyback on their party leaders to get a seat in parliament, Leona Marlin got 191 votes while Cornelius de Weever 159 and Maurice Lake 231.

Click on each political party to see the individual votes

February 2, 2023
0
Willemstad/Philipsburg:---  The Centrale Bank van Curaçao en Sint Maarten is issuing a 5-guilder silver commemorative coin honoring the city of Willemstad and marking its 25th anniversary as a World Heritage site. The historic area of Willemstad has been on...
Read more 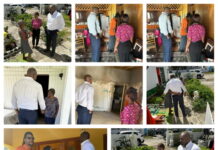