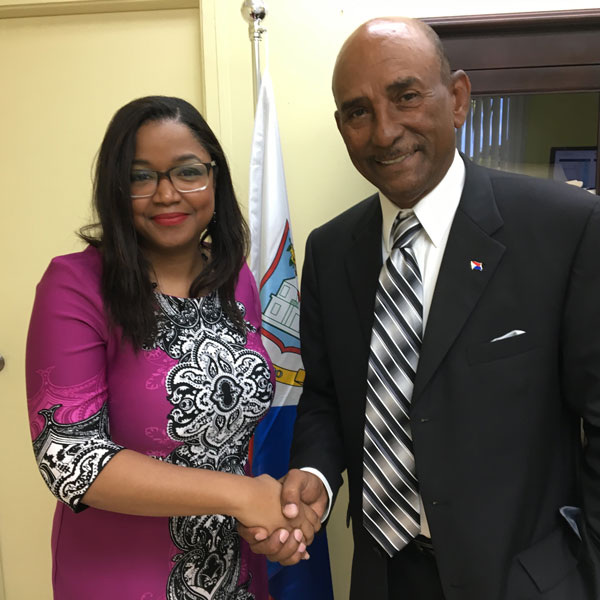 CAY HILL:— APS, St. Maarten’s general pension fund administrator, has completed a restructuring process, which has resulted in the reorganization of the organization. The reorganizing brought with it the naming of a new Chief Executive and addition of a Secretary of Board to the APS organizational structure.

Appointed as new managing director is Nadya van Putten, who brings a wealth of experience to the organization, among which are her contributions made while in service of the financial supervision entity, CFT. Her appointment as APS managing director became effective on May 1, when she began leading the operational organization of APS.

Appointment of a new Managing Director signals arrival of a crucially new phase for the organization.
Like other pension funds around the world, APS has had to cope with and prepare for ongoing developments such as the increasing average life expectancy. The latter entails that pensions have to be paid out for longer than anticipated periods.

With an introduction made by APS chairman of the board, Franklyn Richards, St. Maarten’s Minister of Finance, Richard Gibson, recently welcomed the new Managing Director and wished her much strength and success on her assuming the challenge of leading the pension fund.
More…
It was noted how the incoming chief executive officer would not only be expected to continue building on the achievements booked over the course of the past years, but also to adequately prepare for the pending changes related to the payment of pensions.

Globally, governments and pension providers have been addressing reforms with which to make their pension systems more sustainable and affordable.

A major challenge continues to be the extremely low level of interest rates generated by pension funds. Funds are thus forced to reserve additional capital in order to pay pensions now and in the future. One more concern has been that of volatile financial markets and increased legislation and regulation, leading to higher costs and strict requirements imposed on pension funds and their boards.
The situation on St. Maarten and the role of APS in addressing these issues, has been no different than counterparts worldwide.

Ms. Van Putten succeeds Ms. Kendra Arnell, who as of the launch of APS in 2010, provided exceptional managerial leadership to the organization. Her doing so, with great dedication, is today heralded as a major contribution in the building of the fund.

Ms. Arnell has now advances to the new position of Secretary of the Board and Senior Advisor Research and Development. The position is one that falls directly under that of Board of Directors and is one entailing working closely with the Managing Director.
With this different role, Ms. Arnell has been entrusted with the management and coordination of a number of ongoing and future APS projects.
Among these is the managing of developments related to the APS acquisition of Mary’s Fancy estate in 2014.

Some of the developments are taking place this month. They include the submission of bids for the renovation of the rock walls as well as the subsequent opening of bids by the consulting engineering firm, ICE, and APS officials. This is to be followed by a review of bids and preparation of an advice for the APS board.

The board approval would precede the awarding of a contract and approval of the necessary budget, where after contractors can be informed and the mobilization officially gets underway, with a rock laying ceremony.

The Secretary of the Board is delegated with the ambitious project of constructing some 60 homes at Welgelegen, construction of a much needed vehicle parking structure with offices on ground floor.
Spearheading essential pension reforms is likewise delegated to the board secretary.