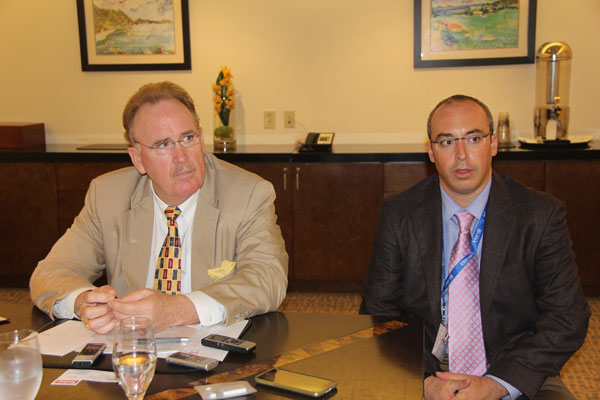 Legislation badly needed to protect owners as well as country

PHILIPSBURG:—David Gilbert and Neil Kolton from Interval International along with Howard Nusbaum representing the American Resort Development Association (ARDA) that are currently on the island conducting an Information Exchange Seminar at Westin Dawn Beach told reporters that Caribbean islands are extremely important for the timeshare industry. Gilbert said that they have about two million members that uses their services, the majority of which are from the United States and each time a survey is conducted the number one place these persons wants to visit is the Caribbean islands.
At the moment Interval International has over 3000 resorts in 80 countries across the world, yet the Caribbean remains the number one destination even though only 185 of those resorts are in the Caribbean. Gilbert said that he believes that this destination does have tremendous opportunities to better its tourism product by ensuring they get the stay over tourists that invests severely in the economy whenever they are on the island. These visitors he said spend money across the board since they shop, dine, and even participate in the gaming industry. Gilbert further explained that timeshare owners in most cases travels in numbers, he said families visit the island with their children and even extended family and since they own week or two in these resorts that are fully equipped with kitchens they also shop in the grocery stores, they dine out at least three times a week while they spend monies on other activities and cars to move around. He said the Government of St. Maarten already recognizes the importance of the timeshare industry and the contribution it makes to the economy.
He admitted at the moment that Aruba is leading St. Maarten because that country constructed some large resorts with brand names such as Marriot that has 800 units that produces 40,000 timeshare owners. He further explained that some of the projects in Aruba are large projects therefore making it a front runner in the timeshare industry in the Caribbean. He made clear that the companies that chose to invest in Aruba built very big resorts in order to attract more business. He did agree that the branding of the resorts did give more comfort to travelers but is hopeful that in the near future the same thing will take place on St. Maarten. Gilbert said that higher end resorts in the Caribbean in will indeed boost the industry and thus economy of any country and it is for this reason they are holding seminars. He said the next seminar is planned for October 2016 which will be held in Miami and they already invited the government of St. Maarten to attend the planned seminar where they will get more information on future development of the 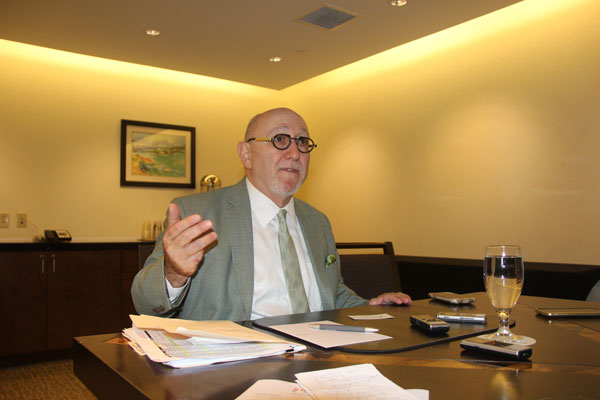 Timeshare industry. Gilbert said that at that seminar there will be people and companies that are ready to invest and it will be good if St. Maarten has representatives there to sell their product. Asked if buyers are concerned about natural disasters such as hurricanes he said that one of the things developers have to do when constructing is use proper materials such as Oyster Bay where they are currently staying. He said natural disasters is a fact of life and people just have to prepare when constructing resorts.
As for crime, he said it’s the number three items of concern to owners but this is not on St. Maarten only but generally. Gilbert also escribe crime as a fact of life and it does not matter where someone lives they risk getting robbed. As for the increased maintenance fees Gilbert made clear that everything has increased globally and the only thing decreased recently is gas due to China and America which places a lower demand for fuel. He said all his bills has increased including electricity bills. He feels that if the increase are justifiable then it will not hurt the business, he said that even when trying to sell timeshare if the fees are too high it turn clients away but as long as it is justifiable and within the right range then there is no real threat.
However, St. Maarten is the second destination and he pointed out that there is not any specific characteristic that Aruba has that does not exist in St. Maarten. He said in St. Maarten there are beaches, fine dining, two cultures, including the gaming industry all of which vacationers look for.
However, he admitted that there is need for the Timeshare Legislation to get off the ground and be put in place since there is need to have rules for every business. Gilbert said that Interval International and ARDA have teamed up with St. Maarten Timeshare Association and they are working rigorously in getting the legislation in place. Both Gilbert and Nusbaum said they have been contributing financially and they legislation is currently being revised by legal experts before it could go to Parliament probably within the next three months.
Gilbert said the developers on St. Maarten have come a long way in trying to support the market by allowing Interval International to donate the monies to the Caribbean Hotel and Tourism Association Education Fund as well as to the Caribbean Tourism Organization Fund. Gilbert said with the resorts on St. Maarten and Interval they have donated almost $700,000.00 to the education fund for scholarships. This he said is to enable Caribbean nationals the opportunity to get professional training in the hospitality industry. Gilbert said the monies goes directly to CTO however, they appealed on students to apply for these scholarships because they monies are there for them to further their studies. Neil Kolton from Interval International said that in St. Maarten the participation is very minimal meaning students on St. Maarten do not apply for the funding. He called on St. Maarten to make use of the opportunity since other islands are making use of it. He said that those interested should apply to CTO or CHTA.
Interval International is monitoring the Zika virus because just recently one of their clients asked to be re-routed because the owner is pregnant and does not want to risk getting the Zika virus.
Howard Nusbaum also clarified that the ARDA and St. Maarten Timeshare Industry are the ones financing the timeshare legislation because they believe that is absolutely necessary that there is consumer protection for investors especially since tourism is the main source of the Caribbean economy especially St. Maarten.