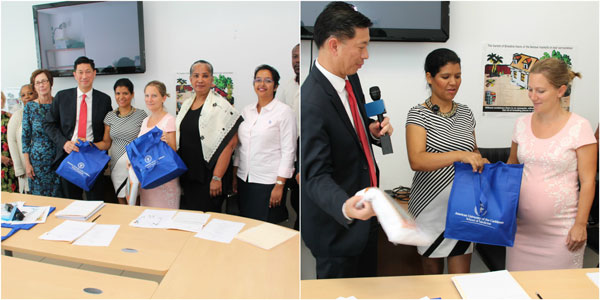 GREAT BAY (DCOMM):—- As part of the Ministry of Public Health, Social Development and Labour Affairs (Ministry VSA) National Mosquito Elimination Community Program Zika Virus disease (ZikV) “Beat ZikV,” the Collective Prevention Service (CPS), a department of the ministry, together with its partners American University of the Caribbean (AUC), and Social & Health Insurances SZV, several weeks ago embarked on a project in which a package, consisting of a bag, a mosquito bed net, mosquito repellant and information leaflets, has been distributed to a special group in the population, namely pregnant women.

The bag and the mosquito nets are sponsored by AUC, while the SZV added mosquito repellent to the package. Only females who are pregnant and are suspected to have contracted the zika virus will be eligible to receive such a package.

This special target group was chosen because they are a sensitive group in the community and can transfer this disease to their unborn child and persons in their immediate surroundings. This program was launched by CPS and partners in September and up till now, some packages have been distributed to qualifying females.

The goal of this program is to raise awareness while halting the spread of the zika virus. CPS will provide the package, after being notified of cases of zika by healthcare providers.

A mosquito control team (Vector team) will conduct an inspection in the surroundings of the zika patient and if breeding sites are found, a surveillance officer will also conduct an investigation after which a report containing the information about the zika case will be drafted.

Having this information will enable CPS to battle the Aedes Aegypti, responsible for the transmission of mosquito-borne diseases such as zika, chikungunya, and dengue.

In the meantime, the entire population has to focus on actively destroying or disposing of tin cans, old tires, buckets, unused plastic swimming pools or other containers that collect and hold water. Do not allow water to accumulate in the saucers of flowerpots, cemetery urns/vase or in pet dishes for more than two days. Throw out the water and turn them over every time it collects water.