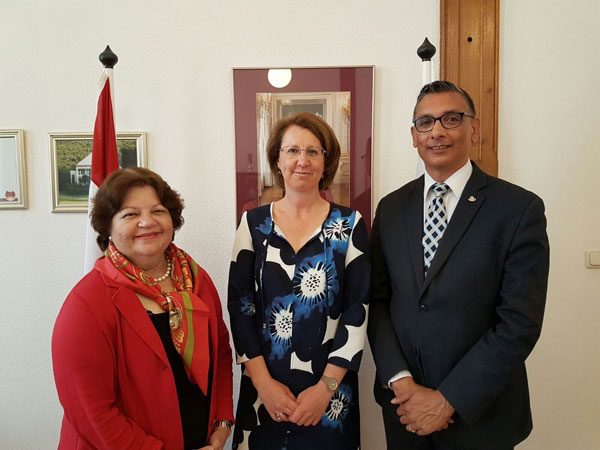 The Hague Netherlands:—On July 19th, 2016 the Director and acting Director welcomed the Minister Councillor at the Belgian Embassy in The Hague, Mrs. Emmanuelle De Foy, to the Cabinet of the Minister Plenipotentiary .
The Director of the Cabinet, Mr. Perry Geerlings, gave a brief synopsis of the role Sint Maarten plays within the Kingdom since obtaining its autonomous status. He also explained the (supporting) diplomatic role the Cabinet plays here in The Hague and Brussels. Whilst direct diplomatic ties between Belgium and Sint Maarten are initially all coordinated via the Ministry of Foreign Affairs in the Netherlands, through our Directorate of Foreign Relations (DBB) diplomatic relations can be established directly for instance via bilateral agreements.
Mr. Geerlings emphasized on the special (geographical) position of Sint Maarten in the Caribbean basin and the huge potential we have as a young nation. It is important for the process of nation building to build international alliances and partnerships going along the way.
The Minister Councillor was very much interested in the coexistence of two countries sharing one Island. Both the Minister Councillor and the Director agreed that our both countries show some similarities and both historically share relations with the Netherlands .
The primary purpose of Mrs. De Foy’s visit was to seek the support of Sint Maarten in the upcoming Universal Postal Union (UPU) election. Belgium who will be vying for a seat on both the Council of Administration as well as on the Operations Council of the UPU.
During the elections on the UPU Congress that will be held from September 19th to the 7th of October 2016 in Istanbul, the Belgian government would like to put forward the following arguments to obtain a seat in both councils.
Firstly that Belgium, although not being a member of either Councils, has played an active role during the cycles of the UPU. Furthermore that Belgium was a member of the Postal Operations Council where they chaired the third commission Physical Services and were therefore a member of the Management Committee of the POC.
Should Belgium be given a mandate within the Council of Administration, it would be represented there by it regulatory body, i.e. the Belgian Institute for Postal Services and Telecommunications (BIPT).
This will entail that Belgium would at International level, BIBT collaborate with the UPU, the European Council (EC) and the foreign regulatory authorities for postal services, among other areas.
The Netherlands, by means of a Diplomatic Note, has expressed its intent to support Belgium in its quest. Similar meetings as the one held at the Cabinet, were held with the representatives in The Hague of Curacao and Aruba.
In discussing their respective Postal Services the Director further informed Mrs. de Foy that the postal services in Sint Maarten has been developing steadily and innovating itself but that the strengthening of our services might be a subject matter we would further like to discuss once Belgium is elected into office.
The Director expressed his vision and hopes to see a tightening of the relationship between Belgium and Sint Maarten in areas such as, the field of agriculture, where Belgium has an international reputation where it comes to the development of tropical edible plant species in Africa and Suriname. It is agreed that both the Cabinet of Sint Maarten and the Trade attaché at the Belgian Embassy will continue to discuss this matter.
Mr. Geerlings furthermore discussed possibilities of (Higher) education for Sint Maarten students in Belgium. Belgium is known for its excellent universities but also for their affordable tuition fees. The level of education provided in Belgium is of high standards and in comparison to the rest of Europe. This the Director commented, would further be discussed with the relevant departments in Sint Maarten.
Mrs. De Foy, at the closing of this meeting expressed her pleasure of being informed about Sint Maarten and said in parting that she does look forward to closer working relations in the various areas discussed.
A follow up meeting to delve even more in-depth into the areas of possible collaboration has been set , at which point all parties involved will be informed of any progress made in the forging of alliances.
The Director thanked the Minister Councillor for her visit and assured her that the sentiments of her country would be conveyed to the Government of Sint Maarten.

July 26, 2021
0
PHILIPSBURG (DCOMM):— The Vaccination Management Team (VMT) encourages everyone who hasn’t been vaccinated to come in this week to one of the administering locations,...

Establishment of a state of health emergency in Saint-Barthélemy and Saint-Martin. | SMN NEWS

July 26, 2021
0
MARIGOT:— The Senate has decided to adopt a state of health emergency in Saint-Barthélemy and Saint-Martin until September 30, 2021. This context allows the Prefet to have greater flexibility in applying national measures at the local level, allowing it...
Read more

July 26, 2021
0
MARIGOT:— The Senate has decided to adopt a state of health emergency in Saint-Barthélemy and Saint-Martin until September 30, 2021. This context allows the... 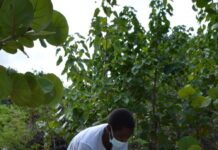 July 26, 2021
0
PHILIPSBURG:— The Nature Foundation St. Maarten is joining as a contributor in a new project ‘In-No-Plastics’, a European Union-funded global initiative. In-No-Plastic focuses on...

July 26, 2021
0
PHILIPSBURG:— The Nature Foundation St. Maarten is joining as a contributor in a new project ‘In-No-Plastics’, a European Union-funded global initiative. In-No-Plastic focuses on...