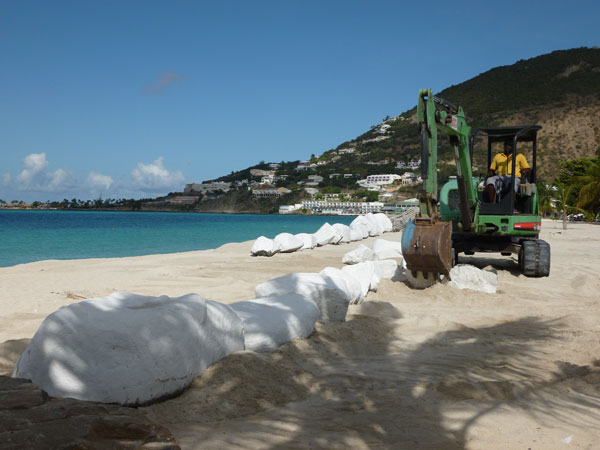 POINTE BLANCHE:— Management team members of Port St. Maarten and Walter Plantz Square (WPS) last week Thursday met with the Nature Foundation, and Manager of the Ocean’s Building, and a representative from the Cabinet Ministry Tourism, Economic Affairs, Transportation and Telecommunications, to discuss the temporary parking at WPS. The meeting was an informative one as each side was able to present their views and opinions. It ended on an amicable note.
On Saturday morning, WPS Supervisor Addison Richardson, looked on as a tractor shifted the white boulders at the beach to further accommodate turtle nesting. The boulders were placed to prevent cars from parking on the water side of the beach. At the same time they also serve as a protective barrier in order to prevent disturbance of potential turtle nesting sites in the vicinity of WPS.
Addison informed the Manager of Ocean’s Building, that the current parking at WPS on the beach side is temporary, as Port St. Maarten is in negotiation to co-develop a piece of property for a parking garage.
The replenishment of Great Bay Beach was done after several hurricanes eroded the beach. The beach replenishment served as a protection for homes and businesses located along the beach area. This later led to the construction of the beach promenade which further adds to hurricane protection of the aforementioned and at the same time has allowed property values to increase.
It is the intention for the beach promenade to be further extended down to the vicinity of Sonesta Great Bay Beach Hotel & Casino. The current temporary parking area for patrons of WPS, sits on the area that will be used to extend the beach promenade when this starts.
Port St. Maarten is very much aware of the importance of sea turtles to the environment. WPS, a community development project of the Port, sits on Great Bay Beach at Down Street, which is one of the most popular turtle nesting places on the island.
The boulders placed at the beach are to prevent vehicles from driving on the beach in the vicinity of WPS. This creates a safe environment for the turtles to nest on the side closest to the water.
Each year between April and November, female sea turtles return to lay their eggs on the major nesting beaches of Simpson Bay, Guana Bay, and Gibbs Bay and other beaches on the island. There are three sea turtles which nest on St. Maarten beaches, including the Green Sea Turtle and the largest sea turtle species, the Leatherback.