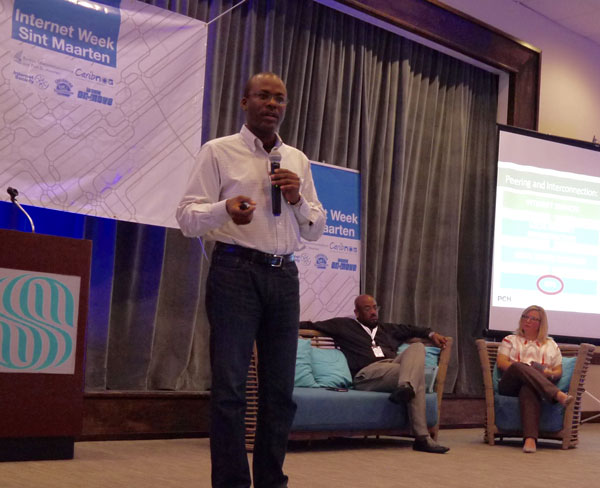 PHILIPSBURG, St Maarten—In the Caribbean, change is in the air. In fact, it’s in the cloud.

There’s a new conversation among the community of technology experts who spearhead Caribbean Internet development, and the buzz is no longer just about physical infrastructure. The architects of the region’s digital future are actively taking steps to strengthen the region’s economy by developing the Caribbean cloud.

“We have to look beyond basic infrastructure deployment, to developing the local content, services and business models that can truly benefit the region,” said Bevil Wooding, Internet Strategist with US-based non-profit Packet Clearing House (PCH).

“Twelve Internet exchange points are already established in the Caribbean, and several others are being considered. While we continue to push for strengthening of critical Internet infrastructure in the region, our focus must also expand to development of the Caribbean Internet-based economy. We need to build out the Caribbean cloud,” he said.

Internet exchange points, or IXPs, are pieces of critical infrastructure that provide points of physical interconnection between the networks that make up the global Internet. PCH has played an active role in setting up more than two-thirds of the world’s IXPs and almost all of the exchange points in the Caribbean. The non-profit firm has worked closely with the Caribbean Telecommunications Union, an inter-governmental CARICOM organization that focuses on regional technology policy. Together, they have actively supported the proliferation of Internet exchanges in the Caribbean.

While establishing physical exchange points is necessary, it is not sufficient to advance the regional Internet economy, Wooding said. Another crucial step is needed.

“Getting the exchange points up and running is a start. But there has to be a shift in the conversation, from local traffic exchange to local content production, local application development, and local innovation. What we want to see is not just more people on the Internet but more people actually taking advantage of the social and economic opportunities the Internet offers,” Wooding said.

“The private sector, academia, and governments all have to work in sync to create opportunities for digital innovators and entrepreneurs to take advantage of the Internet and build on the local IXPs that now exist. We have to actively build the Caribbean cloud.”

Wooding was speaking as part of a panel discussion on developing the Caribbean Internet economy, held on the first day of Sint Maarten on the Move, a regional technology development conference jointly hosted by the Latin America and Caribbean Internet Addresses Registry and the Internet Society (ISOC) in Philipsburg, Sint Maarten from October 27 to 28.

Sint Maarten on the Move was part of Internet Week Sint Maarten, a five-day conference coordinated by the St Maarten telecommunications regulator, BTP, and focused on developing the Caribbean Internet.

The week started with the twelfth regional meeting of the Caribbean Network Operators Group, which was jointly held with the LAC-I-Roadshow of the Internet Corporation for Assigned Names and Numbers, from October 24 to 26. A broad range of technical, social and policy issues related to Caribbean technology development was covered in the three-day event, held with the support of the CTU, the American Registry for Internet Numbers and ArkiTechs.