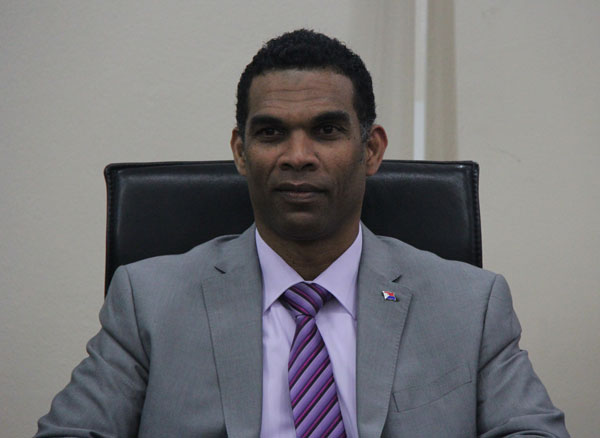 Minister of VROMI intends to hire sub-contractors for district parcel 5 and 6 at Contractor’s expense.

PHILIPSBURG:—Businesses in the Philipsburg area who does not dispose of their garbage in a timely manner as laid down by government could expect fines as high as NAF5,000.00 announced Minister of VROMI Angel Meyers. The Minister of infrastructure announced on Wednesday at the Council of Ministers press briefing that his Ministry plans to take serious actions against businesses in the Philipsburg area. The Minister said the contractor that was awarded the contract for parcel 1 (Philipsburg) is doing is job and government does not have a problem with the collection of household garbage, but there is a problem regarding the disposal of commercial garbage which is the responsibility of the businesses operating in the Philipsburg area. Minister Meyers said that the department will be conducting inspections and those persons that are in default will be fined. The fines he said could be as high as NAF. 5000.00 as regulated by government.
As for parcel 5 (Cay Hill) area and parcel 6 (Saunders/ St. Peters) area the Minister said his Ministry has some serious concerns with the collection of household garbage in those two areas and if the contractor that was awarded with the contract does not get the collection of garbage under control then he intends to hire some sub-contractors at the expense of the current contractor. Minister Meyers further stated that if the current contractor continues to fall behind with the collection of garbage in the two parcels then he intends to take the contract and give it to the next contractor that falls in line during the bidding process.
Minister Meyers said that government had anticipated at least two days of delays during the transition period but not five of six days. He said the new contractors began working on April 1st and it was the contractors who had to indicate to government whether or not they were prepared to take over on April 1st. Asked if government provided garbage bins for the contractors on a timely manner or if the bins was also delayed. The Minister again said it was the contractor who had to inform government during the first two days to let them know that the previous contractors had removed their bins and that bins had to be placed at certain locations. He said instead of the contractor contacting government they made make-shift bins that were way too high for the residents to dispose of their garbage.

It should be noted that the department of infrastructure prepared the contracts for the contractors and they are the ones that stated in the contracts that they will be providing the garbage bins and even though they know that the bins that were on the streets did not belong to government the department did not place bins in the districts leaving residents with no choice but to dump their garbage on the roadsides that created a monstrous jobs for the contractors who only begin working on April 1st. The Minister did admit that there seems to be some sort of communication problems between the Ministry and the contractor but he has serious concerns and his Ministry will be monitoring the situation closely.
Asked what measures his Ministry intends to take against the former contractor who according to residents of Cay Hill and St. Peters area did not collect garbage for at least two days before his contract ended and removed his garbage bins on the morning of March 30th and March 31st from their locations.
However, SMN News understands that the Minister of VROMI is peeved because his mother lives in the Cay Hill area and her garbage was not collected because her garbage is placed somewhere inside her property and it is not visible to the haulers thus she has been complaining to her son that her garbage is not being picked up.