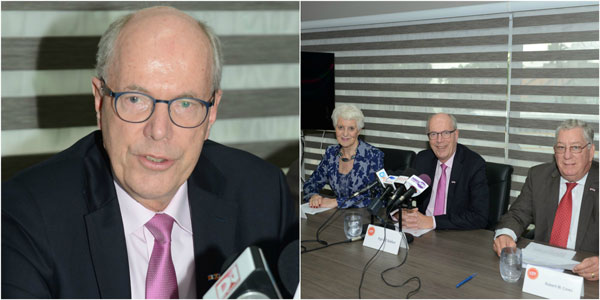 Oranjestad:— During its most recent visit to Aruba, the Board of financial supervision for Aruba (CAft) indicated that the utmost must be done in order to meet the maximum acceptable deficit norm. At this moment particularly the indirect tax income is lagging well behind under the influence of low economic growth. In contrast, the reopening of the oil refinery will result in additional income for the government. The estimated direct tax revenue of Aruba for 2018 represents a 22% rise. This is such a strong increase that the CAft is not sufficiently convinced of the long-term sustainability of the Aruba public finances.

Budget implementation in 2016
The implementation report for the period up to the third quarter shows that the deficit of the public sector over this period amounted to 1.5% of GDP. Once again there was a substantial windfall in the area of the profit tax resulting from the introduction of the VAS system. But on the other hand, the BBO tax revenue, the duties and the wage tax and income tax up till September have been considerably lagging behind compared to the budget, partly because of the disappointing economic growth. In the fourth quarter, the first income resulting from the reopening of the oil refinery will be collected. The surplus of the Social Insurance Aruba (SVb) is expected to decrease, whilst the deficit of the General Health Insurance (AZV) will deepen. All things considered, it seems possible that the LAft norm of 2.0% of GDP can be met, as long as there are no further setbacks.

2017 and long-term budget
The CAft will soon receive the adopted budget for 2017 in order to submit its advice. In accordance with the LAft, the budget shows a deficit of 0.5% of GDP. The CAft will further assess how realistic the underlying assumptions actually are. A number of one-off windfalls result from the reopening of the oil refinery, thereby helping to reduce the deficit. In order to allow for sound advice on the adopted budget in 2017, it is necessary to receive the risk analysis shortly, making it possible to assess the financial implications and the associated risks of the reopening of the refinery. Aruba has promised to send the risk analysis as soon as possible to Parliament and the CAft. The CAft is concerned about the lack of underlying structural improvement in the budget and has great hesitation with regard to presented long-term data. The proposed remediation measures have only partially been implemented and the development of personnel expenses still lags behind the targeted annual decrease of 5%.

On the resources side, direct taxes show an increase in 2017 with 9% compared to the 2016 revised budget 2016, from AWG 578 million to AWG 631 million. In 2018 direct taxes are estimated to rise further to AWG 768 million, which represents an increase of 22% compared to the previous year. This means that an increase of 31% over direct tax is expected by Aruba over the course of two years. The higher economic growth resulting from the reopening of the refinery does not entirely justify such an upsurge. Neither do the actions of intensified collection actions or improved compliance lead to an increase of such magnitude. The CAft is therefore not convinced the sustainability of public finances of Aruba may endure in the long run.

Financial management
The CAft noted during the visit that important steps have been made in order to improve the financial management. A positive aspect is that Aruba is striving to receive an unqualified audit report from the auditor in 2020, confirming the trustworthiness of the budget figures. Beginning 2017 Aruba will draft a roadmap in which the improvements to obtain this audit report are laid down. The CAft will monitor its implementation.

The CAft paid a working visit to Aruba on Friday, December 9. Meetings were held with the acting Governor, the Minister of Finance and Government Organization, the Council of Ministers and Parliament.