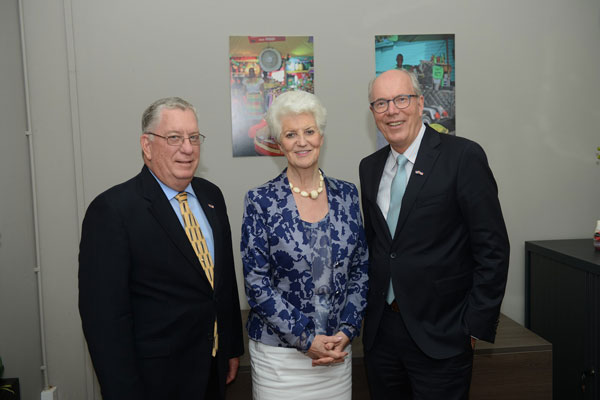 Oranjestad:— On March 15th, 2016 the Board of financial supervision Aruba (CAft), which is exerting financial supervision as per August 1st, 2015, paid a visit to Aruba, and the purpose was the rendering of account over the 2015 budget and the progress of the 2016 budget. According to the CAft chairman Age Bakker, Aruba managed to meet the deficit limit as stated in the National Ordinance financial supervision (LAft). This was related though to considerable incidental windfalls, which means that the structural challenges still remain. The Board pointed out that for 2016 it is necessary to get at an earlier point in the year a deeper insight in the way the financial situation of Aruba is developing. The first opportunity to realize this is in May, when additional advice is given on the 2016 budget. Furthermore the probable re-opening of the refinery has a substantial effect on the budget. The Board has advised to make an analysis for the budget covering the revenues and the risks for the budget, including the potential environmental impact. Previously the Board has advised the Kingdom Council of Ministers to endorse a USD 100 million loan for Aruba.

Consultations CAft
During the visit to Aruba, the CAft, consisting of chairman and Board member Age Bakker and the Board members Sybilla Dekker and Robert Croes, conferred with various parties. During the visits to the Governor, the Minister of Finance, the Council of Ministers and the Committee on Financial and Economic Affairs of the Aruba Parliament and the Aruba Central Bank (CBA), amongst others the progress of the rendering of account over the execution of the 2015 budget and the further evaluation of the 2016 budget in May 2016 were discussed. Another matter was the 2017 budget that is currently being prepared, and which in line with the current schedule should be submitted in a timely fashion and in compliance with the domestic legislation. During the visit the Board was also informed on the developments regarding the refinery, the social funds and the developments in tourism.

2016 Budget
According to the agreements reached in December 2016 between CAft and Aruba, a further evaluation of the 2016 budget shall take place in May. The realization figures of the first quarter of 2016 will be assessed. By then it will be clear if and when the re-opening of the San Nicolas refinery shall take place. It is expected that this re-opening will provide for an influx of direct and indirect funds in the state treasury. The government expects that because of this influx, any setbacks which CAft has warned against in its opinions, will be fully absorbed in the 2016 budget. The Board emphasizes that in order to ensure a proper assessment of the financial and economic impact of the reopening of the refinery, it will need timely access to the contracts in which these estimated funds are included. Additionally the Board advises to produce a risk analysis in which possible costs for the budget are calculated. These are costs that may result from a selected construction, based on which Aruba will be the owner of the oil refinery and thus responsible for potential costs related to negative environmental impact. Especially to deal with the refinancing of maturing loans, Aruba shall contract a USD 100 million loan on the international market. The Kingdom Council of Ministers has endorsed this loan on March 11th, after having received a positive advice from the CAft to that effect.

Fourth execution report 2015
The figures in the fourth execution report show that Aruba closed the year 2015 with a deficit of 2.0% of its GDP. Considering that according to the LAft the deficit limit of 3.7% of the GDP for 2015 relates to the collective sector of Aruba, the CAft has corrected the realization of Aruba for one specific transaction, namely the cancellation of the debt of Aruba to the Social Insurance Bank (SVb) of ANW 60 million, which in fact has no effect on the deficit of the collective sector of Aruba. Taking this correction into account, the preliminary realization of Aruba is 3.2% of the GDP. However, it is relevant to point out that with the introduction of the VAS, revenues from the profit tax that otherwise would have materialized in 2016 have now been advanced, resulting in an incidental excess income in 2015. These incidental windfalls differentiate the underlying picture, thereby making it clear that the structural challenges still remain. Additionally, caution is required when interpreting the execution figures, considering the quality of the financial management and the fact that the GDP estimate of the Aruba Central Bank (CBA) which was applied, is of April 2015. The Board has requested the Central Bank of Aruba to update the GDP realizations and forecasts at regular intervals, if possible.

Source: St. Martin News Network CAft chairman Age Bakker: “The LAft deficit limit was met in 2015; in 2016 the focus should be on structural strengthening of public finance”