MARIGOT:– Louis F. Beauperthuy (87), was laid to rest in a family plot at his home in Orient Bay on Saturday.
Born in Brooklyn, New York to Louis Ferdinand Gaston “Fefe” Beauperthuy and Eulalie Adelia Bryan-Beauperthuy, Louis visited St. Martin when he was six years old. Several decades later, St. Martin would become his home, a place of entrepreneurship, and his final resting place.
Louis was not an idle body, but travelled frequently with his father and uncles to purchase goods for the island’s business community. He later ended up in a boarding school on the French dependency of Martinique. Once completing his studies there, Louis sought adventure and employment abroad and found his way to the Big Apple (New York) where he started working at the Ford Motor Company. His father “Fefe” was a mechanic at the company.
In 1948, Louis (19) joined the United States Army. He started as an enlisted soldier with a specialty in sharp shooting. Being an ambitious young man and willing to climb the ranks, he was selected to go to an Officer Training School in 1954 where he attained the rank of 2nd Lieutenant. Before that, Louis, did a tour of duty in Germany, and returned to the U.S. in 1952. 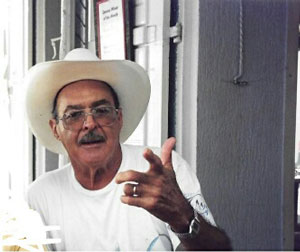 While in Germany, Louis met his lovely wife Hilde. From Germany, Louis briefly returned to the U.S., but then after was posted to France. While there, he continued to climb the ranks within the U.S. Army. Louis became a 1st Lieutenant while stationed in France, and later became a Captain in the early 1960s. He was enlisted in the medical core and acted as a translator for the U.S. Army while in France, participating in the Armed Service meetings that included Charles de Gaulle, the 18th President of France.
After his tour of duty in France which was approximately four years, Louis returned to the U.S., but was no sooner deployed to the Korean peninsula in East Asia. Besides his service there, he also served on behalf of the United States Government in Libya, Panama and several other countries.
Louis career in the U.S. Army came to an end when he suffered injuries during the Korean conflict. He was discharged with honours in 1963 at the age of 34.
After returning to the U.S., Louis and his wife lived in El Paso, Texas. There, he and Hilde owned and operated several businesses. These included realty, car interior upholstery, a furniture business, The Old West restaurant, and a hotel. Besides having a busy life, the couple always took time out to spend weekends with friends in New Mexico where they enjoyed fishing on the lakes.
Louis (56), returned to St. Martin in 1985. After a busy lifestyle back in the U.S. that stretched over two decades, Louis, wasn’t planning to slow down and enjoy early retirement. A man known to be a ‘jack of all trades,’ foresaw opportunities back home and jumped in with both feet on the ground which was a trademark of his entrepreneurial success back in the U.S.
The entrepreneurial spirit that made him and his wife Hilde a success story back in El Paso, Texas, led to the opening of a lumber yard known as ‘Cash, Carry, restaurants ‘Rancho del Sol,’ ‘Palm Beach,’ and a Nightclub. Louis’s brother Rubin Beauperthuy operated Boo Boo Jam.
At his final resting place, the U.S. Government, represented by Sergeant Muriel Smith, presented to his daughter Bonny Louise Linares-Beauperthuy and visiting brother from Aruba Valentin Arrindell, an American Flag along with words of gratitude for his service to country. Titus, caretaker of Captain Louis, on Saturday toasted a bottle of ‘Andre Champagne’ over his tomb along with a goodbye salute in the presence of family and close friends.
Captain Louis F. Beauperthuy, will forever be remembered for his intriguing life here and abroad. May his soul rest in eternity.