Philipsburg:— A vehicle believed to be involved in Monday night shooting in Sucker Garden that claimed the life of Piasano was found somewhere in the Madame Estate area. SMN News learnt that while the vehicle believed to be involved in the fatal shooting  was confiscated but no one was arrested.
It is not clear if the vehicle that police believe was used in the latest shooting is part of the nine vehicles the police and RST confiscated on Tuesday in an ongoing investigation.
Efforts made to reach members of the Prosecution including Chief Prosecutor Ton Maan proved futile as none of the prosecutors could have been reached by telephone for confirmation. Police Spokesman Ricardo Henson said he also heard that a vehicle that was involved in the shooting was confiscated but he did not get any detail information on the case. Later Henson said that no suspect was arrested in the Sucker Garden shooting, he also said that indeed police confiscate a vehicle in an ongoing investigation but said it is not a vehicle that was involved in the Sucker Garden shooting. Asked if the car was part of the nine cars confiscated by the joint team of detectives, Henson said he did not know and he also did not say which case the confiscated vehicle is linked to.

August 11, 2022
0
PHILIPSBURG:--- His Excellency the Governor of St. Maarten Drs. E. Holiday paid a working visit to the St. Maarten Police Force KPSM on Thursday, August 11, 2022.. The management team of KPSM delivered a state of affairs presentation of...
Read more 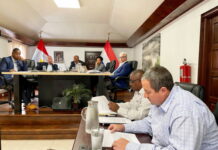 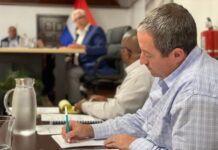 August 11, 2022
0
SABA:--- The Island Council is demanding more transparency from the Saba Government, and unanimously adopted a motion on Wednesday, August 10, obligating the Executive...

August 11, 2022
0
SABA:--- The Island Council is demanding more transparency from the Saba Government, and unanimously adopted a motion on Wednesday, August 10, obligating the Executive...

August 11, 2022
0
SABA:--- The Island Council wants to see more time given to duly respond to the Dutch Government law proposal on social security and would...