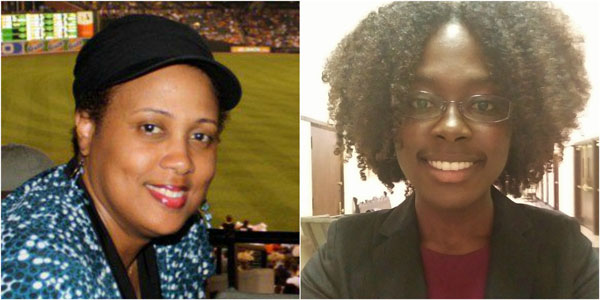 CHICAGO:— Caribbean screenwriters, Diane De La Haye and Onicia Muller will have a staged reading of their comedy sketches during the National Sketch Writing Month (NaSkeWriMo) showcase at Under The Gun Theater in Chicago on October 13.
Annually in September, NaSkeWriMo challenges scriptwriters to complete 30 sketches in 30 days. Participants track their progress by posting their scripts to the organization’s website (www.naskewrimo.org). This year, 25 writers wrote a total of 233 sketches. Onicia Muller earned the title of 7th Most Prolific Writer by completing 15 of 30 sketches. Only two writers were successful in writing 30 sketches. Both Diane and Onicia are first-time NaSkeWriMo participants.
Diane is a freelance Screenwriter and Story Editor based in Toronto and Jamaica. A graduate of the Vancouver Film School, Diane works in script development. Most recently, Diane De La Haye served as a judge for NYC Midnight’s 2016 Screenwriting Challenge. In her sketch ‘Fab Four’ long-time friends discuss marriage, babies, and death over ice-cream in the park.
Muller is a St. Maarten-born writer and comedian based in Chicago. Last August, she opened for Majah Hype, the reigning king of Caribbean Comedy. Her sketch, ‘OkCouple’ is about a married couple discussing the high cost of hair restoration surgery. Muller is developing the ‘OkCouple’ sketches into a web series centered on Winnie and Harold – middle-aged, unemployed newlyweds.
National Novel Writing Month (NaNoWriMo), an annual novel writing project happening in November inspired NaSkeWriMo. However, the two initiatives are otherwise completely unrelated. Thursday’s showcase is open to the general public also features sketches by Jake Dewar, Colin M Kibler, Caitlin Safiran, Egan Sweeney, and Norman Jamaal Burt.