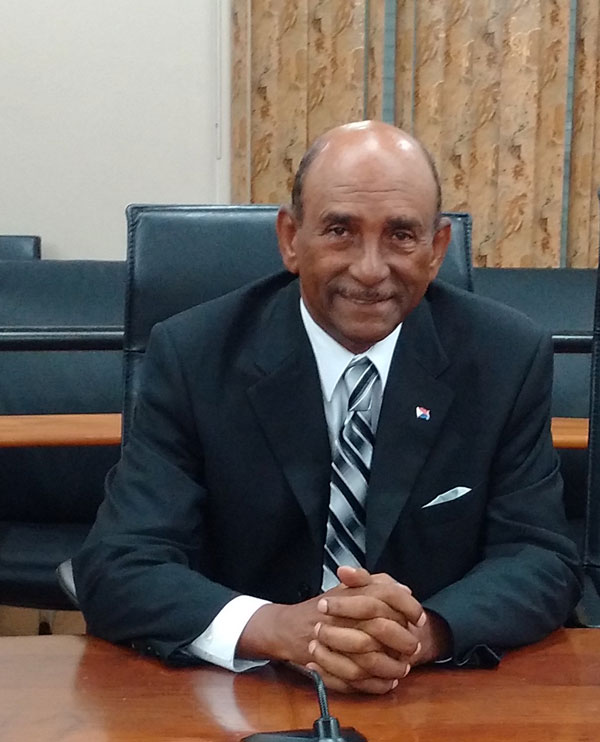 Both topics will be addressed by ECLAC and CDDC in Mexico and Washington.

PHILIPSBURG:— Deputy Prime Minister and Minister of Finance Richard Gibson Sr. announced at the Council of Ministers press briefing that the entire Caribbean are under threat due to global warming and the Correspondence Banking issues for cross border financial transactions. Minister Gibson said these issues were raised at the CDDC conference held in St. Kitts two weeks ago even though they were not on the agenda.
The Deputy Prime Minister said the Caribbean Islands have the sea, sun and sand that attracts tourists to these destinations but due to global warming which is created by Industrial countries causes the sea level to rise by 1.88mm which he said has devastating effects to all Caribbean island since the rise in sea level causes severe erosion of sand on the beaches. He said because of these effects the Caribbean islands will lose money and their economy is under threat.
Another issue he said that was discussed is the Correspondence Banking issues that also affects the entire Caribbean, since Banks now chooses to cut off their relationships with the banks of the Caribbean instead of mitigating the risks as per client.
The Deputy Prime Minister said that the CDDC have decided to further discuss these matters in May when they hold their meetings in Puerto Rico and also in Washington in June. He the ECLAC and CDDC are arms of the United Nations and as such these matters will be taken to the United Nations and Global Warming is affecting all Caribbean Countries and since the problems arises from Industrial countries then the intention is to have those countries compensate the countries that are being affected. He said even Africa is being affected and that country’s nation may face starvation due to global warming.
Minister Gibson said the Banking issues which is regulated by FATCA is also affecting all countries and one of the main reasons the correspondence banks chose to cut relationships with banks in the Caribbean is because of the huge fines they are given if they are found to be non-compliant. Minister Gibson said the fines ranges in the millions and describes them as astronomical.