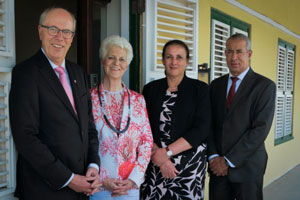 Den Haag:— The countries in the Caribbean part of the Kingdom are making progress in improving their public finances, according to the Board of financial supervision (College financieel toezicht – Cft) in its Annual Report of 2015. The Cft members are in the Netherlands from April 11 to 13 for a working visit. They will meet with the chairmen and members of the First and the Second Chamber, the minister of Interior Affairs and Kingdom Relations (BZK) and they will visit the ministries of BZK and Finance, the Council of State and the National Audit Office.
The countries
The Annual Report shows that Curaçao has booked a surplus for the third year in a row, and that the deficit of Aruba, where supervision was introduced last year, has decreased beyond expectation, whilst Sint Maarten for the first time since 10-10-10 has realized a balance budget. Sint Maarten however was given an instruction to settle its arrears and to reform its pension and health care system. Cft chairman Age Bakker: “Good progress is being made in achieving sustainability of public finances; nonetheless improving financial management still remains a major challenge.” The countries show an expected economic growth between 0.5% and over 1% this year, which is a slight improvement compared to 2015, which closed with a growth between 0.1% and 0.5%.
The public entities
All public entities have a balanced budget. In the area of financial management, the picture is diverse: Bonaire is working hard towards improvement and Sint Eustatius, which was given an instruction, has launched a comprehensive action plan so as to get both the managerial and the financial and administrative organization in order. Saba has its financial management under control.
Debt quota
The debt quota of Curaçao has increased in 2015 to 40% GDB, mainly because Curaçao is financing the construction of a new hospital, whilst Sint Maarten’s debt quota has stabilized at a 33% GDP level. Considering the low interest rate the countries are able to borrow against via The Netherlands, the countries are staying well within their interest burden margins.
The Cft recommends that the countries comply with the medium-term debt norm of 40% GDP. A band width of 5% can be applied in order to absorb economic shocks. With Aruba it is agreed that as of 2018 budget surpluses will be realized in order to reduce the excessive debt.
The Annual Report also comprises the findings of the committee in charge of evaluating the Kingdom law on financial supervision (Rijkswet financieel toezicht – Rft) and the Spies evaluation committee. In the Annual Report it is concluded that it is of the utmost importance that adequate follow-up is given to these findings.