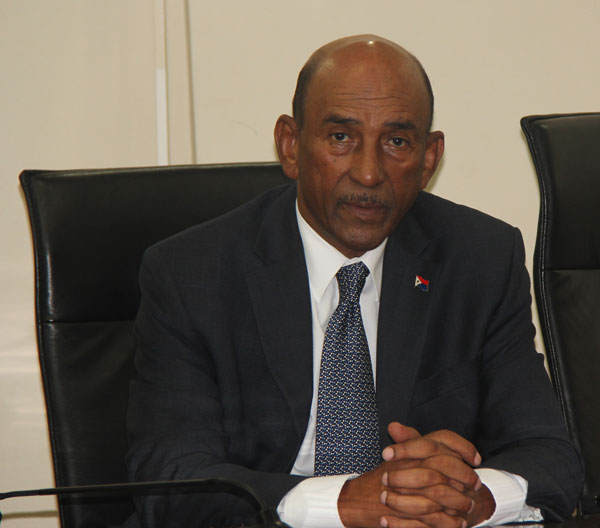 PHILIPSBURG:—Minister of Finance Richard Gibson Sr announced on Wednesday at the Council of Minister’s press briefing that he made a promise when he first took office almost nine months ago and he can now report that the promise he made when he reported to parliament is a promise he kept. Gibson said that when he reported to parliament regarding the legislation the former government had prepared to increase the number plate fees, he told parliament that he would scrap that legislation and go after the casinos so that they could pay their dues, instead of shifting the burden on the entire population.

Gibson that this shows when someone remains focus, steadfast, things can be accomplished. He said this process was not an easy task because at least 3 times the documentation on the legislation disappeared. He said he was relentless and continued the process and now the benefits are surfacing. He said there were outstanding taxes that had to be collected and there was no reason for any government to take the easy way out like the previous government tried to do and to try and increase taxes on everyone instead of collecting the casino fees that were owed to the government.
Gibson Sr fires back at politicians that say seniors should be put to sleep.
Minister of Finance Richard Gibson Sr. who is a candidate contesting the elections on the National Alliance slate called on senior citizens to vote for seniors during this parliamentary election slated for Monday, September 26th, 2016 since some politicians have said on the campaign trail that seniors should be put to sleep.

Gibson said he addressed the issue given his age and politicians that are contesting the election stated publicly that given his age he should be put to bed, or put to sleep. He apologized to the senior citizens because the persons that have been making these statements have no respect for the people who have worked all their lives and have contributed to the community and society and now that they have reached the senior citizens age, persons are advocating that people of that age should be put to bed or to sleep.

Gibson called on the senior citizens to remember these statements when they go to the polls on Monday and to vote for senior citizens that have been working and has been doing their jobs well and can still continue to do their jobs.

Source: St. Martin News Network
Casino fees now being collected, number plate fees not increased, Promise given is a promise that has been kept — Gibson Sr.