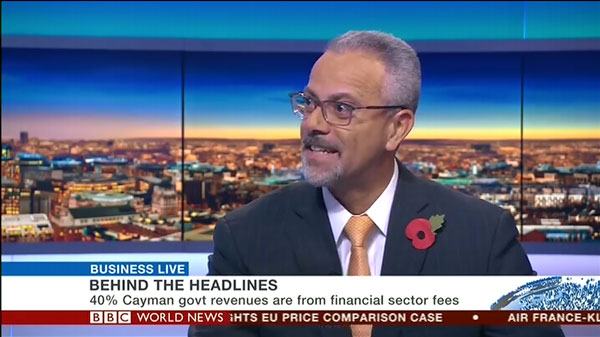 CAYMAN ISLANDS:— During a recent appearance on BBC, Cayman Finance CEO Jude Scott highlighted the Cayman Islands’ dedication to upholding the standards and expectations of a premier financial jurisdiction through transparency and a strong compliance culture.
The host, Tanya Beckett, began with an insight into the Panama papers, mentioning that some of the companies in the papers were linked to the Cayman Islands. She asked Mr Scott how the Cayman Islands ensure that all activity remains above board and whether the Panama papers had any impact on the financial services industry in Cayman.
“The reality is not all offshore jurisdictions are made the same. We put a lot of work in, and some cases – for example, our anti-money laundering regimes – have been in place for over 15 years,” Mr Scott said. “We really look to create a strong compliance culture, and as a result, we’re seeing a lot of clients who desire that kind of environment now looking to relocate into the jurisdiction.”
“We’ve always modelled our jurisdiction as a top quality jurisdiction – really following global international standards,” he said. “With the Panama papers, there was not really much impact on the Cayman Islands – actually we’ve seen a lot of positive outcome from it.”
Ms Beckett went on to inquire as to how the Cayman Islands face one of the biggest topics in international financial discourse – transparency – and asked Mr Scott if he believed that tax havens would see more or less business going forward.
“We’re not a tax haven,” Mr Scott stated. “We’re a transparent jurisdiction and we’re a tax neutral jurisdiction.”
“From a tax perspective, we have signed up to UK FATCA and US FATCA. We have been one of the early adopters of Common Reporting Standards – and really the vast majority of the business we do is fully transparent,” he said.
Mr Scott also said that Cayman Finance and other industry stakeholders work hard to ensure that the Cayman Islands’ financial industry is held to the highest standards and that all of those who work within the industry are of the highest calibre.
“As a jurisdiction, I guess it has become a part of our DNA,” he said. “We’ve really focused on being a premier jurisdiction modelled after London as well as New York and so we constantly look to seek out the best local and international talent, attract them and also retain them.”