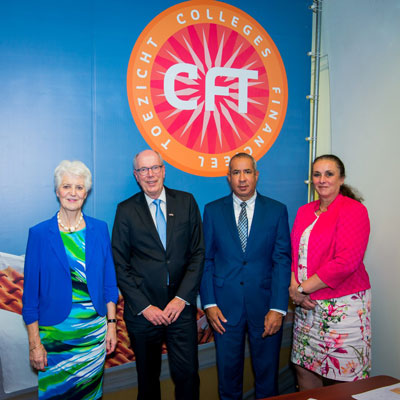 WILLEMSTAD, Curacao:— During its visit to Curaçao the Board of financial supervision Curaçao and Sint Maarten (Cft) has indicated the need for diligent work in the remaining weeks of the year with regard to the realization of non-tax revenues, in order to preserve a balanced 2016 budget. The performance is generally in line with the forecasts, though it is highly dependent on the incoming revenue in the fourth quarter. If the forecast is met, Curacao will have fulfilled the standard of a balanced current account for a number of years. That serves as an indication that the public finances of Curaçao have a sustainable nature. The challenge is to maintain the social security funds in balance, and to get the financial management up to standard. The Cft also calls attention to swiftly adoption of the annual accounts over the years 2012 to 2015.

Execution 2016 budget
The implementation report over the period up to the third quarter shows that Curaçao expects to close the year with a positive balance, yet taking into account that some non-recurring income still has to be realized in the last quarter. Seeing the achievements booked up to September, Cft considers that Curaçao will need to manage its finances firmly in order to make sure that this income is indeed timely attained, thus paving the way to a balanced year-end. In this regard the Board observes that commonly in the last months of the budget implementation year there is less room to absorb any possible setbacks. The Cft will closely monitor the realization of these revenues.

The social funds together have booked a deficit of ANG 22 million over the first three quarters. The deficit of the AOV /AWW continued to grow. This shortage is partly offset by positive results of the BVZ fund. The aggregate deficit will be charged to the wider swing fund, causing the balance of this fund to decrease in line with the forecast. Reducing the shortfall in the AOV fund remains an important priority for Curacao as it strives to keep its social funds balanced on a permanent basis.

Financial Management
The upgrading of financial management to international standards remains a major challenge. In such event the obtaining of an unqualified statement of the auditor on the budget in 2018 would become an achievable ambition. The financial functions of the ministries would have to be strengthened to this end, with the Ministry of Finance playing a coordinating role. An important part of financial management is the timely completion of the process of budget accountability. The 2012 and 2013 financial statements have already been placed on the Parliamentary agenda. The 2014 annual accounts have been timely submitted by the Council of Ministers, but the General Audit Chamber (Algemene Rekenkamer Curaçao – ARC) has not yet finalized its audit. The financial statements 2015 have also been delivered on time but they still need to be verified by SOAB and the ARC. The Cft is persistent in its request for the financial statements of the past years and the financial statements of future years to be submitted, audited and adopted at a faster rate, so that, as part of the budget law, Parliament can obtain information about the actual budget execution and realization in a timely manner.

Preparation 2017 budget
In its opinion on the draft 2017 budget, the Cft emphasized the need for further substantiation of the financial sustainability of the social funds. Meanwhile the draft budget has been discussed in the Parliamentary central committee. The public hearing on the draft budget in Parliament is scheduled to start on December 15. After the adoption of the budget, the Cft will draw up its final opinion.

During its two-day visit to Curaçao on December 6 and 7, Cft met with the outgoing Council of Ministers, the outgoing Minister of Finance and informally with Parliament.

Source: St. Martin News Network
Cft Chairman Age Bakker: “A great deal has been accomplished; now it’s time to get the financial management up to standard”