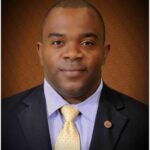 PHILIPSBURG:— Sewing seditious behavior and interfering with civil servants executing directives is a dangerous precedent to set, says Independent Member of Parliament Christophe Emmanuel in response to a circulating video of Chairman of Parliament Rolando Brison confronting economic inspectors at a nightlife establishment.

The fundamental problems with Brison’s actions, the MP said, are many. First, as an MP and Chairman of Parliament, ...