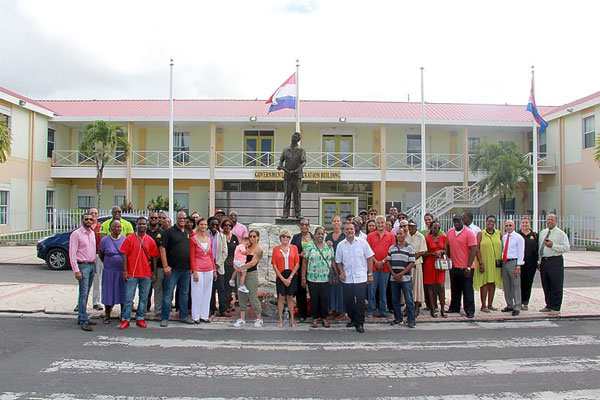 PHILIPSBURG:— A message of hope permeated the air as DP and UPP family and friends commemorated the birthday of the late Dr. A. Claude Wathey, co-founder of the DP.

The annual wreath laying at the statue of the late Dr. A. Claude Wathey was held on Sunday, July 24th in commemoration of what would have been the late Dr. A.C. “Claude” Wathey’s 90th birthday. As is customary, representatives of the Democratic Party and the United People’s Party laid wreaths along with Dr. Francio Guadeloupe of the University of St. Maarten, Mrs. Valerie Giterson of the Claude Wathey Educational Foundation and family members of Claude. Supporters of both parties attended the brief ceremony, which was led by Erno Labega, the son of the other DP founder, the late Clem Labega.
Speaking briefly at the gathering were the 2 party leaders of the UPP and DP respectively.
Party leader MP Sarah Wescot-Williams reminded the gathered crowd that every year “regardless to what the circumstances may have been, on July 24th we have always presented ourselves at the commemoration of Claude Wathey’s birthday.”

“With all of today’s challenges, the fact remains that this island has grown in leaps and bounds and that is in no small measure because of Claude’s contributions. That legacy can never be taken away from him or from the Democratic Party”, Wescot-Williams said.

MP Wescot-Williams closed with the thought that she could remember the days of Claude and Clem and that things were indeed more simple, and approaches were therefore simple as well. With the phenomenal growth the island has witnessed, current and future generations need to now take up the mantle with the same vigor and determination as those who have gone before us.