Home Local News Colade suspects to appear before judge of instruction on Thursday.

PHILIPSBURG:—The three suspects that were arrested on Monday in the Colade investigation namely, Regina Labega, Fabian Badejoe and Erica Fortuno will appear before the judge of instruction on Thursday. Detectives arrested the trio on Monday after conducting a six year investigation after the former head of Finance Bas Roorda filed a complaint against them for theft.
Based on information SMN News gathered Labega, Badejoe and Fortuno owned a company called DMC, that company has an offshore bank account in Anguilla where they were transferring up to USD 1.2M per year claiming that the company was doing marketing for the St. Maarten Tourist Bureau. At the time when the complaint was filed in 2010 Labega was the director of the Tourist Bureau on St. Maarten while Fortuno was the heading the Tourist Office in New York. While DMC is registered to Badejoe and Fortuno, Labega is a shareholder of the marketing company.
On October 16th 2015 the National detectives conducted five house searches which were led by the judge of instruction, on the request of the public prosecutor’s office.

SMN News learnt that the detectives were busy these past two days questioning close relatives of the three suspects.
However, on Monday May 30th 2016 the detectives made a second move, this time they arrested the three suspects. Regina Labega, Fabian Badejoe and Erica Fortuno. The fourth suspect Edward Dest appeared before the court on March 25th 2015 and was sentenced to one day in prison. 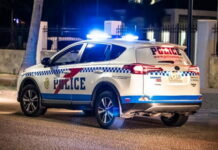