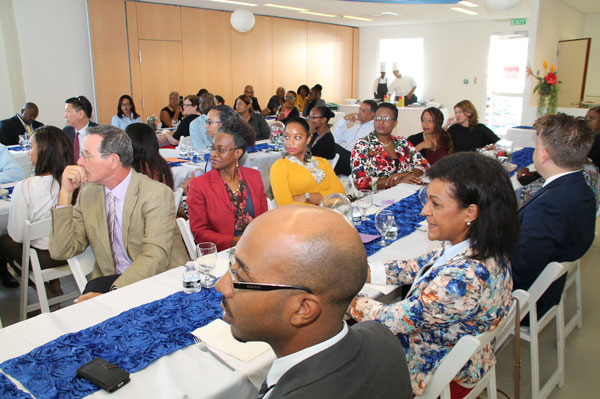 PHILIPSBURG:— Recently, the Council of Ministers hosted a New Year’s breakfast meeting to introduce key staff members to all ministers. The staff of the cabinets of the ministers, Secretaries General of the 7 Ministries, their replacement and their secretaries as well as the support unit of the Council of Ministers, the Secretariat of the Council, were invited and were introduced by the respective ministers. All Ministers, including the Minister Plenipotentiary, were present at the breakfast.
Ms. Cassandra Janssen, Secretary General to the Council of Ministers welcomed the staff to the event. Ms. Janssen explained that the Council of Ministers deemed it necessary to organize such a special session for these introductions as teamwork is essential in order to execute the vision and goals of the ministers. Knowing who is who within and across ministries are therefore key for the proper functioning of Government.”
In general, the persons present welcomed the initiative and thanked the Council of Ministers for the gesture. In addition to the formal introductions, Prime Minister William Marlin took the opportunity to briefly provide basic information on the Governing Program to ensure that key players have a shared vision. In the near future, additional information sessions throughout the organization in relation to the Governing Program will be organized.
NIPA students under the leadership of Ms. Renata de Weever and Mr. Alexander Adoptie displayed their skills and catered for the breakfast. The staff present was served a healthy and hearty breakfast which included a mobile omelet station. The New Year’s breakfast meeting was conducted in the future area designated as the cafeteria of the ‘new’ Government Administration Building.