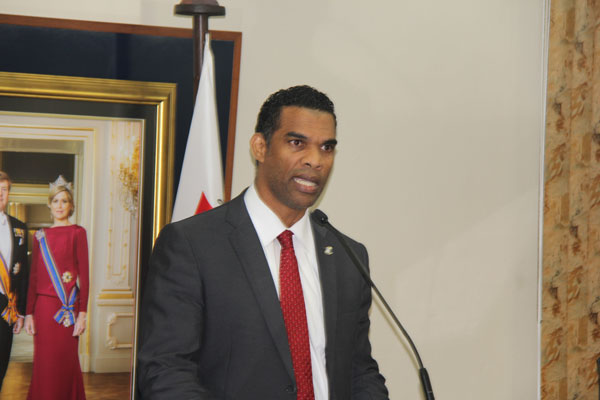 PHILIPSBURG:— The final advice as to which of the contractors that participated in the bidding process to collect solid waste on February 3rd 2016 will be discussed and approved by the Council of Ministers on Thursday announced Minister of VROMI Angel Meyers. Meyers said he received the final advice that was prepared by VROMI on Monday, he said as soon as a decision is taken on the matter the various contractors will be notified by letter. The new contractors have to begin garbage collection on April 1st 2016.
On February 3rd some 19 contractors submitted their documentation for the bidding process but 10 of them were disqualified since they did not meet the terms of reference to participate in the bidding process. Meyers said of the 9 that actually participated in the process, five of those companies submitted the most competitive bids therefore those are the ones that won the bid for the coming five years which will cost government NAF.32.736.093.74 for that duration which breaks down to NAF.6.547.218.00.
The Minister of VROMI said this year the department of VROMI divided the collection of garbage into eight parcels compared to five in the past years.
Those eight parcels he said are broken down into districts. Parcel 1 is the .Philipsburg area, 2.
Pointe Blanche, Sugar Garden and Round the Pond, 3. Middle Region and the surrounding areas, 4, Dutch Quarter and Belvedere, 5, Bush Road and surrounding areas, 6, South Reward and surrounding areas, 7, Cole Bay to Simpson Bay area, 8, Simpson Bay to Beacon Hill and surrounding areas.
Asked by SMN News if the contractors will get enough time to obtain a loan and purchase heavy equipment for them to begin working on April 1st Minster Meyers said that of the five contractors, three of them are new and indeed they needed a letter of comfort to obtain their loans to purchase their equipment. He said so far none of the contractors that won the bids did not indicate to him that they would be having any type of problem come April 1st. The Minister said he does not know if the contractors made other arrangements in order for them to begin working.

The Minister also explained that he has been hearing all sorts of comments regarding the location where government chose to construct the new sewage plant which will be a joint project funded by the European Union. Minister Meyers said that in order for St. Maarten to obtain the Euros 3M they have to follow certain guidelines laid down by the EU. He said that government sought and looked at several locations before deciding to construct the sewage plant on filled in land inside the lagoon. One of the conditions set by the EU is that there cannot be any residential residents within 100 square meters of the plant. He said suggestions were made to construct the plant in Cole Bay behind Tropicana but that location is not in compliance with the regulations. Meyers said while people have been complaining not one of them came up with alternative solutions and beside that raw sewage is being pumped into the ponds and lagoons on a daily basis which creates a severe health hazard.