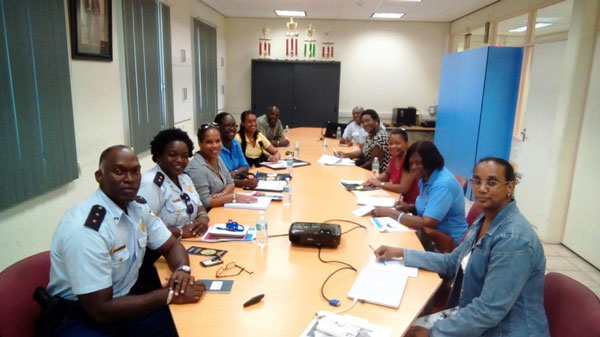 PHILIPSBURG:— Community Police Officers (S. Carty, S. Crispulo & E. Josepha) in collaboration with School Inspector Priscilla S. Bell, M.A.Ed., met with the School Managers or their representatives from Philipsburg (Oranje, Sr. Borgia, St. Joseph, Marie G. de Weever) and Cay Hill (Asha Stevens & LU) and the Seventh Day Adventist School in preparation for the start of the Cops & Kids program. Meetings have already been held with the Leonald Connor & CIA schools. During the course of the meeting, the goals and objectives of the program were explained. School Boards had been updated in October on the progress of the pilot program and the plans for this school year.
The Cops & Kids program which is designed for the students of Group 8/Grade 6, had been piloted in the previous school year when the exam candidates had concluded their FBE Exit Examinations.
The core of the program is to bridge the gap between school-aged citizens and the Sint Maarten Police Department, through structured interaction with the Community Police Officers. The desired outcome is that because of the rapport between these two parties, the student conflict in and out of school will begin to decline.