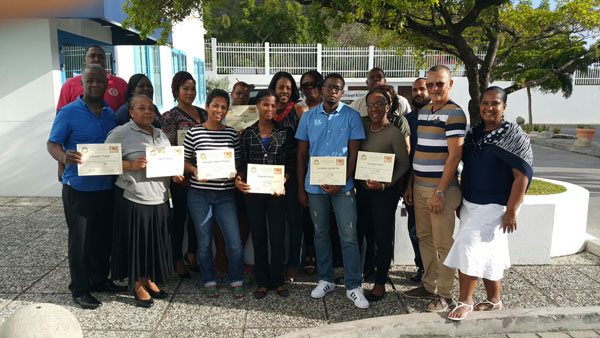 GREAT BAY  (DCOMM):— Several staff members from the Collective Preventive Services (CPS), a government department under the Ministry of Public Health, Social Development and Labour, and the Inspectorate, completed a three-day course on vector control. On July 22, the CPS staff members were presented with their certificates. The course started on July 20.
Mr. G. Davelaar was the instructor during the first two days while Mr. L. Tromp was the instructor on the last day.
The participants were instructed on the anatomy, physiology and behavior of mosquitos. They learned about rodents with focus on rats.
The participants for two days went into the field with Mr. G. Davelaar to put what they learned immediately into practice. On the third day they spent learning about the different types of chemicals that are used to fight pests.
On behalf of the Minister of Public Health, Social Development and Labour Emil Lee, CPS Department Head Dr. Virginia Asin congratulated the participants and complimented them on the enthusiasm throughout the three-day workshop.
Dr. Asin also thanked the instructors for a very engaging and interactive training. Jason Peterson represented Secretary General Joy Arnell during the certificate ceremony and also congratulated the participants and thanked the instructors on her behalf.
During his opening speech Minister of Public Health Emil Lee stressed the importance of multi sectoral partnerships and collective and combined efforts in eliminating mosquito breeding sites to prevent Dengue, Chickungunya and now Zika.

Due to the recent daily sporadic rainfall, CPS would like to use this opportunity to also remind the community as well as visitors to wear light colored clothing at dusk; long sleeve shirts and pants; and use mosquito repellent to prevent being bitten by a mosquito that could possibly be carrying a mosquito borne disease.

Persons who suspect that they have a mosquito-borne disease should consult their family physician who based on your symptoms should refer the person to SLS Laboratory to confirm the clinical diagnosis.

The physician(s) once suspect a mosquito borne disease be it Zika, Chikungunya and/or Dengue, reports to the CPS. Upon receiving the report CPS will contact the patient to arrange for follow up as it relates to mosquito breeding sites in and around the persons’ immediate surrounding. During this follow up CPS’s surveillance team takes the opportunity to identify other epidemiological linked cases and to orient the person on protection, exposure, and prevention to mitigate the further spread and increase of cases.

CPS re-enforces its message that all residents and businesses need to take proactive measures to prevent mosquitos from breeding. Be on the alert for mosquito breeding sites and eliminate!

Actively destroy or dispose of tin cans, old tires, buckets, unused plastic swimming pools or other containers that collect and hold water. Do not allow water to accumulate in the saucers of flowerpots, cemetery urns/vase or in pet dishes for more than two days. Throw out the water and turn them over every time it collects water.
Screen off cistern outlets, cover and screen septic tanks properly.
An increase in the mosquito population puts residents and visitors at risk. For information about dengue fever, zika and chikungunya prevention measures, you can call CPS 542-2078 or 542-3003 to report mosquito breeding sites or send us an email at This email address is being protected from spambots. You need JavaScript enabled to view it.
//<!–
document.getElementById('cloak31489').innerHTML = '';
var prefix = 'ma' + 'il' + 'to';
var path = 'hr' + 'ef' + '=';
var addy31489 = 'surveillance' + '@';
addy31489 = addy31489 + 'sintmaartengov' + '.' + 'org';
var addy_text31489 = 'surveillance' + '@' + 'sintmaartengov' + '.' + 'org';
document.getElementById('cloak31489').innerHTML += '‘+addy_text31489+’‘;
//–>