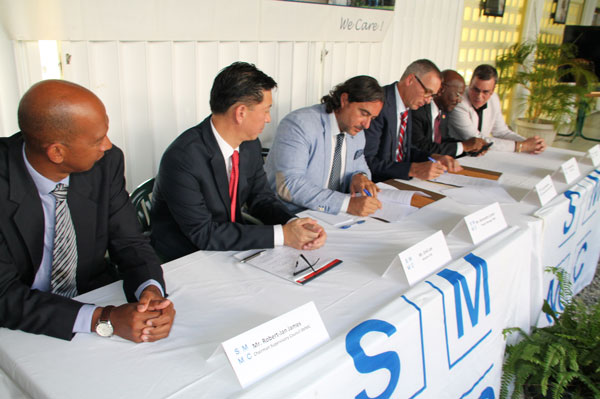 “If getting St. Maarten a new hospital is against the law I am all the way behind it.’

PHILIPSBURG: — The tripartite, consisting of the St. Maarten Medical Center, USZV, and the government of St. Maarten signed the Design, Build and Management contract with the contractor INSO on Monday. Among those at the ceremony were Prime Minister William Marlin,

Minster of VSA Emil Lee, Kees Klarenbeek of SMMC and representatives of INSO.
Klareenbeek outlined the need for the new hospital which he said will provide more services which also included oncology and dialysis which is currently being offered at SMMC.

USZV Director Glen Carty said that finally, they have reached another step especially for USZV because the health insurance company pays approximately NAF20 to Naf 30M per year to other countries to provide health care for St. Maarten’s patients. He described it as a logistic nightmare for USZV since they have to pay the expenses of airline tickets, hotels, daily allowances, last minute appointments changes, all of which the patients complain about and also blames USZV for. Carty said it will be a dream come through if all the patients that travel abroad for medicare could be treated at the New Hospital. Carty went on to say if that is against the law, he is all the way behind the project because it’s something that St. Maarten needs including the people of the surrounding islands.

Minister of VSA Emil Lee said he spent hours at SMMC since he was the president of the SMMC board when it was going through bankruptcy. He said when he left the financial situation at SMMC had progressed but when he returned as Minister of Health he was disappointed to learn that SMMC was again in financial chaos, thus he made it a priority to get SMMC back on track by getting a new hospital. He said during the discussions, they discussed almost everything, which he considered open and transparent while getting one at the right cost.

The Minister went on to say that the financing of the New Hospital has not yet been finalized.

Also adding his comments at the signing ceremony was Prime Minister William Marlin who also said that SMMC out grown itself and that that the people that suffer are the patients that most of the times were sent out too late for further medical treatment. The completion of the New Hospital will be in 2019.