Home Local News Delegation travel to Curacao on Spadaro’s private aircraft even though businessman does...

“Where is the integrity in government?”

PHILIPSBURG:— Interim Minister of Finance Micheal Ferrier, former Minister of Finance and consultant for the Ministry of Finance Martin Hassink, Arno Peels the Secretary-General of Finance, and Rodney Richardson boarded a Pilatus aircraft with registration number M-YFLY on Tuesday as they head out to Curacao where they will board KLM to continue their journey to Brussels to seek financing for a Waste to Energy Plant (WTE) for St. Maarten.
The aircraft belongs to well-known businessman Saro Spadaro, a personal friend of interim Minister of Finance Michael Ferrier.
It should be noted that both Ferrier and Spadaro have their own private aircraft and are holders of a pilot license but they do not have a commercial pilot license that would authorize them to transport passengers, especially a government delegation.
When the delegation arrived at the Princess Juliana International Airport a number of photographs were taken as the concern persons want to know where government integrity is especially when they begin to wheel and deal with persons within the business community especially since the current interim government supported the establishment of an integrity chamber on St. Maarten. 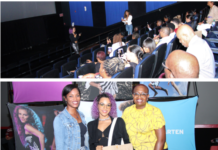