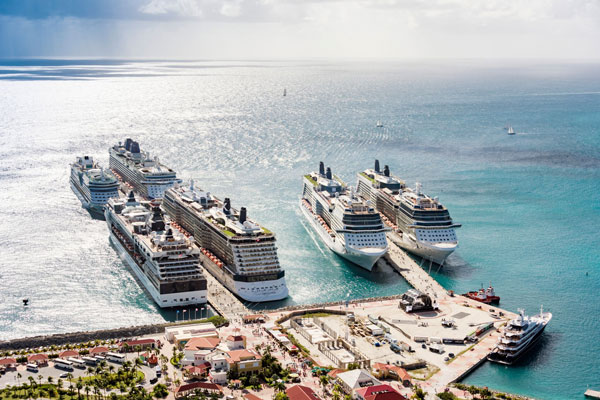 POINTE BLANCHE:—  Passengers from four Celebrity Cruise Lines ships in port on December 28, were treated to a Dick Clark Productions Inc. – based in Los Angeles, California – concert with Demi Lovato. Part of the program was aired on “Dick Clark’s New Year’s Rockin Eve 2017” live from Time Square, New York via ABC which was seen by millions in the U.S. and across the world with Sint Maarten being part of the line-up of performers.
According to the producer’s, it’s the most watched program on New Year’s Eve that aired from 8.00pm to 2.00am featuring Ryan Seacrest who helped to usher in the New Year. Seacrest’s co-host was Jenny McCarthy.
The special broadcast prominently features coverage of the annual ball drop event, along with live and pre-recorded musical performances by popular musicians from Times Square, New York, Hollywood and other venues.
The evening featured five and a half hours of special performances and reports on New Year’s celebrations from across the U.S.
The performer’s lineup featured some of the following singers at Times Square: Mariah Carey, Gloria Estefan; Billboard Hollywood Party: Flo Rida, G-Eazy, John Legend; Las Vegas: Lionel Richie; New Orleans: Jason Derulo, Lucy Hale; and Sint Maarten: Demi Lovato.
New Year’s Rockin Eve has consistently remained the highest-rated New Year’s Eve special broadcast by the United States’ major television networks; its 2012 edition peaked at 22.6 million home viewers, not including viewers watching from public locations.
Celebrity Cruise Lines asked Dick Clark Productions Inc. to produce a concert at Port St. Maarten that would be taped and one of the songs would be aired on the New Year’s Eve program.
Port St. Maarten Management is very pleased that the destination was selected as a venue for the performance, and secondly, the opportunity led to millions in the U.S. and around the world to see part of the concert that was produced on Sint Maarten which provides name recognition for the destination to millions who watched the show on ABC and from other venues, a value that could not be measured in advertising dollars.
New Year’s Rockin Eve was conceived by entertainer Dick Clark. The first edition was in 1973. Dick Clark hosted New Year’s Rockin Eve annually from 1973 through 2004, and served as a Times Square correspondent alongside Peter Jennings for ABC News’s special coverage of year 2000 celebrations. New Year’s Rockin Eve will remain on ABC through at least 2024.
The four vessels in port during the Lovato concert were the Celebrity Equinox, Eclipse, Summit and Reflection.

February 25, 2021
0
Detectives of the Special Unit Robberies are investigating a robbery that took place On Wednesday afternoon February 24th, 2021 at approximately 12.30 pm, on a...