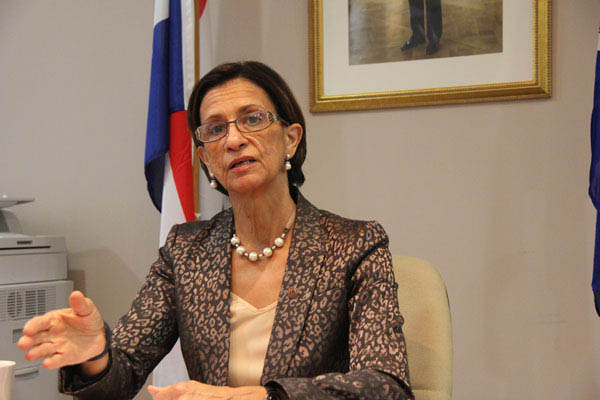 PHILIPSBURG:— On Monday, January 18th the Democratic Party of St. Maarten (DP) held its first press conference for the New Year. Party Leader, MP Sarah Wescot-Williams, touched on a number of important topics during her talk with reporters, as outlined below.

Public Health Ordinance passed by Parliament on January 15th, 2016
MP Wescot-Williams reflected on the public meetings held at Parliament last week on the now passed public health ordinance which was presented by Minister of Public Health, Social Development and Labor, Mr. Emil Lee (DP) and the team of his ministry. MP Wescot-Williams understands how the talks came to be dominated by the debate on the St. Maarten Medical Center (SMMC). The MP firmly believes that in any discussion on public health, the medical center is very much involved and should be part of any such discussions as a most relevant topic. According to MP Wescot-Williams, “The information provided by Min. Lee should have served to dispel the smoke-screen launched by the UP Faction about the lack of urgency for the medical center from this coalition.” She further observed that “It was important for the public to understand where we’re at with the SMMC and to understand that before any talks of expansion can be entertained, the SMMC first has to be placed on a good footing in regard to its finances.” The MP is confident that the public of St. Maarten was able to understand why certain steps have been taken and that this government is adamant about receiving all of the information and that any plans must be substantiated, with foremost the needs of St. Maarten are as it relates to healthcare of our people.
The MP was not pleased with the “stunt” that members of the opposition tried to pull during the public meeting by presenting a motion identical to another one that had been previously presented in January 2015 and was shot down, because of its shortsightedness. The motion would have Parliament instruct the Minister of Health to execute a portion of an ordinance (law), which had not yet been received by Parliament. While she concurs that the proposed ordinance might have offered extended coverage to some groups in the community, she queried at what cost this would come and what current benefits would be lost.
“This draft ordinance is not only about extending health coverage, it is also about cutting costs in the area of health”, the MP stated, “And if we’re going to look at extending the coverage by means of that draft ordinance, we need to look closely at those areas which the draft suggests that be cut in the area of healthcare.”
As for the opposition MPs’ motion, the deliberations and voting were put off as allowed by Parliament’s Rules of Order. MP Wescot has also requested the VSA Minister to provide parliament a chronology of this draft law wherever it is, as it appears that not even the Council of Ministers has yet approved this draft law. Yet, the opposition wants the parliament to allow the minister to partially carry it out.

Electoral Reform
MP Wescot has assured the general public that she has not gone quiet on the topic of electoral reform, but neither will she double up on efforts in this respect. She points to the indications of the government that they have picked up this matter and have started to work on it. The MP is pleased that proposals that she presented to Parliament during her tenure as Prime Minister will be part of the research, along with other proposals that have also been submitted and are being considered. “As a parliament we need to decide how far we can realistically get in seeking to have reform and to have it passed before the next election.” She said, “Time is critical and this government and coalition are fighting against time to get certain things done.” Election without reform is voting for instability. However, as critical as the issue of time is, she assured that no new election date was been sought, though she will be keeping a finger on the pulse of how government is dealing with the matter.
Tax Law changes that affect all foundations and associations.
MP Wescot-Williams expressed her appreciation to Finance Minister Richard Gibson for accepting the proposal she presented him and coalition partners with respect to some changes in the tax laws. These changes make it obligatory for foundations and associations to now register and file taxes. The MP had asked the Minister to consider a time extension for associations and foundations to register and to launch a public campaign to educate associations and foundation on the new requirements as far as registration and filing are concerned. The Finance Minister has given his full support to this matter.
Institute for Financial Education
MP Wescot-Williams is quite pleased to learn from a recent meeting with Central Bank representatives that a proposal made to the President of the Central Bank during her tenure as Prime Minister in 2014 is diligently being worked on. The proposal centered around the consideration of an institute for financial education on St. Maarten. This proposal came about when as Prime Minister she was appraised of plans for renovations of the current Central Bank building on St. Maarten and the plan to build a new Central Bank building. With the MP’s first thoughts being the possible opportunities for St. Maartener’s to benefit and work in the bank, she realized the need for persons to be educated in the areas that the central bank is responsible for. The MP inquired back then and was told that in Curacao there is a program in place wherein different stakeholders participate. Based on a request for a proposal from the Central Bank, it was established that the institute could be established under the legal form of a foundation consisting of representatives of at least the following entities: the Central Bank, St. Maarten Brokers Association, St. Maarten Bankers Association, the St. Maarten Insurers Association and the Government of St. Maarten. The main task of the institute would be to provide financial institutions and individuals with the most relevant education program such as trainings, courses and workshops, both as open enrollments and as customized programs, exams, seminars and conferences on a wide array of financial subjects throughout the year. This could be achieved through collaboration with University of St. Martin, and the training institute for the Dutch Banking, Insurance and Investment Sector. Stakeholders have been approached on St. Maarten and some have already given their consent to be part of this initiative. Hopefully it wouldn’t be too long before this initiative can be realized.

Workings of the coalition
The coalition is currently working on a plan to present what the priorities are for the coming months, realizing that both time and resources are limited. The DP plans to maintain its priorities and vision that we have outlined before, however taking into account that these limitations exist and in addition, we are part of a coalition, consisting of 3 parties and 2 independent members of parliament.
A summary of the issues that the Democratic Party will focus on for the short term include healthcare, social development and labor/immigration, as well as integrity and transparency, timeshare legislation, electoral reform, the elderly and a general pension scheme, tax reform and general education as building blocks. A healthy and active population, a responsive government, employment and business opportunities, social cohesion and dialogue, and social safety nets for those unable to participate (fully).