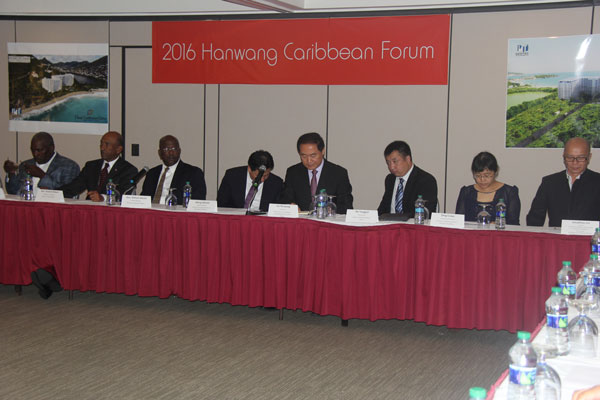 PHILIPSBURG:— The developers of the Pearl Caribbean China held a forum at the Sonesta Great Bay Resort on Saturday morning prior to the groundbreaking ceremony which was held at Belair Beach. At the forum, the developers shared information about their company New Lifetown that have been doing in several countries such as Malaysia which generated a huge response, they also do business in South East Asia.

The Chinese have placed lots of energy in creating the silk rope which enables them to conduct trade with several countries such as Asia, Europe, Africa, and the Netherlands where they have 500 projects and created 8,600 jobs. The developers said due to the silk rope (one belt) they managed to hold the G-20 summit in China since their business investments have brought about positive changes for these countries.

The Chinese have been using a strategic plan to create a global partnership through innovation and economic development. Another highlight was through their plan they do not only sell Chinese products but also sells products from India such as spices.

The chairman of New Lifetown Shuqiang Cui aka Trey said that through their projects they managed to create economic development where everyone benefits. They insist that the Pearl Caribbean China will create at least 400 stable and good paying jobs for the people of St. Maarten while there will be an incubation center which would allow young entrepreneurs to get involved in their own business. One of the things the government of St. Maarten would have to focus heavily on is training its people with the assistance of the Chinese in order for the people of St. Maarten to occupy the jobs that will be available to them when the project is completed.

Finance Minister Richard Gibson Sr in his remarks said that this project will change the business landscape on St. Maarten since the country will not only depend on tourism but instead, the trade will become part of the diversification.