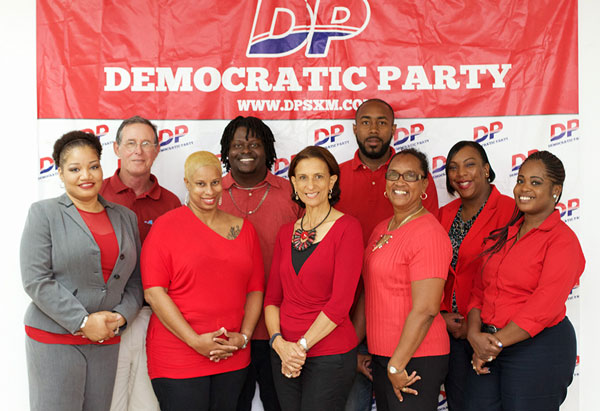 President Gumbs: “It Is On”~

PHILIPSBURGl:—- On Saturday March 5, 2016 the Democratic Party of St. Maarten continues to renew itself with a new board. Solution minded and ready to build upon the DP’s proven track record of transparency and the solid principles of Open Government. Headed by new President Marinka Gumbs; Secretary Jude Piper, Treasurer Giselle York, and members Jim Rosen, Vida Boyrard, Juliette Piper, Michelle Martina and Quinton Marlin. Giselle York was the only outgoing board member who postulated and was reelected to her position.

DP Leader and President of Parliament MP Sarah Wescot-Williams gave opening remarks to the members and gave an overview of what was about to take place at the meeting. Minister VSA Emil Lee gave a synopsis of where we are with current issues on health, such as the hospital, preventative measures taken with regards to the Zika virus and tripartite discussions as it relates to Labor affairs- including the abuse of 6 months contracts.

Newly-elected President Gumbs, shortly after becoming President, thanked the membership for their attendance and for their confidence in team DP. She stated that the DP leader was doing a phenomenal job as President of Parliament, while she applauded Minister Lee for being the best Minister of VSA to date. She urged members that it was the last time DP will be in defence of those who were once with the party but left. She told members “we will not be afraid but rather, “It is on” expounding on her plans that she said has top priority as she collaborates with the new board. She intends to take DP back into the districts and rebuild the party by engaging the community; seriously look at the campaign strategy for elections; internally organize the party to function as a political party year-round; revamp DP membership to attract prospective members and volunteers; and more.

Outgoing President Hasani Ellis in his report thanked the DP Leader and members for their confidence in him while congratulating the new board. He said he believes DP has been doing very well. He reported to the membership, information during his tenure as the President. Re-elected Treasurer York gave an overview of DP finances for the years 2014, 2015 and gave some insight for the year 2016.

DP leader MP Wescot-Williams in her closing remarks thanked the outgoing President Hasani Ellis and board. She also, welcomed and thanked the incoming board for coming onboard Team DP! She continuously told members to remember that “It is on”.

An enthusiastic membership applauded the new board, wishing them much success in their endeavors as well as the DP leader and DP Minister Lee. President Gumbs and her new board hit the ground running, while she wishes to urge the population that DP is going to work very hard and she encouraged interested persons to join as members of team DP SXM! We are the board of the Democratic Party working for the interest of all of St. Maarten and its people. This concludes the press release.