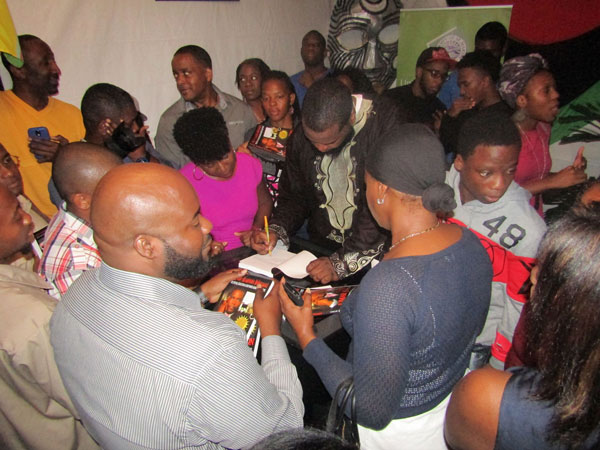 MARIGOT/GREAT BAY:—“When you give a five-year-old, an eight-year-old, or a ten-year-old psychiatric medication, you are interfering with the brain natural growth process,” said US clinical psychologist Dr. Umar Johnson at the 25th annual Black History Celebration Lecture.
Dr. Johnson delivered the anniversary lecture, which was organized by Conscious Lyrics Foundation (CLF), “to an audience of over 600 people, at the University of St. Martin,” said Shujah Reiph, CLF president.
Dr. Johnson warned against using various psychiatric medications on the island’s children—citing their increase use on especially Black boys. He identified some of the drugs and compared what would be their effects here to what he sees in his practice in the USA. “These medications cook the brain of my young St. Martin brothers,” said Dr. Johnson, who is also a certified school psychologist.
“I have learned for the three nights that I’ve been in St. Martin that many of you have been used to fund a multi-billion-dollar psychiatric drug cartel, misdiagnosing your boys with an invisible disease called ADHD and conduct disorder,” said Dr. Johnson.
Dr. Johnson read to the attentive audience the definition of ADHD in the DSM-5, the psychiatric diagnosis handbook of the American Psychiatric Association. He then said that such a diagnosis more accurately represents “Ain’t no Daddy at Home Disorder.”
He went on to stress the importance of Black men’s active involvement in their sons’ upbringing. “Your son doesn’t need drugs; your son needs his daddy,” emphasized Dr. Johnson.
Dr. Johnson, who also identifies himself as a pan-Africanist, received a standing ovation after his three-hour lecture, and spent another hour autographing his book, Psycho-Academic Holocaust, said Reiph. While interacting with the guests, a few people could be heard asking Dr. Johnson when he would be returning to the island, said Reiph.
“In fact, soon as the Q&A period was over, the guests had rushed to the book table and purchased all 150 copies of the author’s book that were on sale on Saturday,” said Reiph.
The history lecture, which took place on February 20, 2016, was organized by CLF in collaboration with MP Christopher Emmanuel. “On behalf of CLF, I thank all of the partners, audience members, and well-wishers who made the 25th annual Black History Celebration lecture a smashing success,” said Reiph.