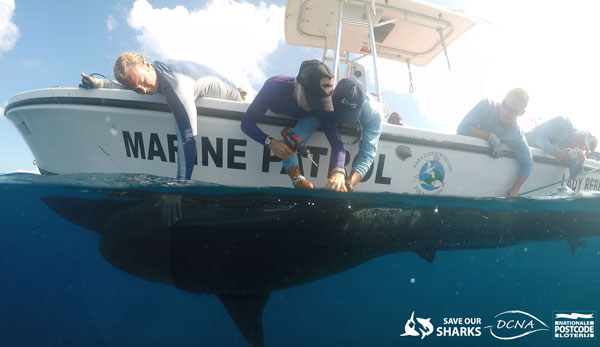 PHILIPSBURG:— A total of 22 sharks were caught and tagged last month as part of a region-wide “Save our Sharks” project. Little is currently know about the status of shark populations in Dutch Caribbean waters and tagging studies are a pivotal first step in determining which sharks are present, where they can be found and most importantly how best to improve management and protection of these important apex predators.

On board the “Caribbean Explorer II”, which set sail from St Maarten, were shark scientists and conservationists from the Saba Conservation Foundation (SCF), Nature Foundation St. Maarten (NFSXM), Florida International University (FIU) and Sharks4Kids. The aim of the expedition was to learn as much as possible about shark abundance and diversity on the Saba Bank. Over the course of the 6 day expedition, the team caught a whopping 22 sharks.

Sixteen of the sharks were Caribbean Reef Sharks, which were fitted with PIT tags, a kind of bar coding, which can be used to identify sharks and track their movements. The other six sharks were Tiger Sharks (Galeocerdo cuvier), and four of these received their own custom fitted satellite tracking device. Tiger Sharks spend quite a lot of time at the surface, which allows satellite tracking devices to be used to track their movements with pin point accuracy.

The tagging expedition was organised as part of the Dutch Postcode Lottery funded “Save our Sharks” project, which aims to change the way we think about sharks and to create safe havens for them by working with fishermen, local communities and scientists.

PIT tags were inserted under the sharks’ skin just below the dorsal fin. PIT stands for Passive Integrated Transponder, which acts essentially as a lifetime barcode, allowing scientists to track their movements. Veterinarians also use this type of tag to ‘microchip’ pets, like cats and dogs.

Satellite tags were from Wildlife Computers SPOT (Smart Position or Temperature Transmitting) tags, which were attached to the first dorsal fin of the sharks. These tags transmit to satellites, which allow the animals to be tracked through the ARGOS system for up to 4 years. The tags use radio transmissions, so they must be exposed to air in order to transmit. Each time the dorsal fin breaks the surface a geo location is given with an accuracy estimation of a few hundred meters.
Caribbean Reef Sharks (Carcharhinus perezi) occur throughout the tropical waters of the Western Atlantic and Caribbean and as far south as Brazil. The best place to see them in the Dutch Caribbean is around Saba, St. Eustatius and St. Maarten where they cruise around the outer edge of coral reefs, pinnacles, and near drop-offs. Young sharks prefer shallow coastal waters such as lagoons, seagrass beds, and shallow reefs. Caribbean reef sharks are really not aggressive, except if they are threatened, and are typically curious, especially when they see divers.

Tiger Sharks are one of the largest sharks, with a bulky body, powerful jews, and razor sharp-teeth strong enough to rip open the shell of a sea turtle. They are one of the oceans’ most powerful predators. Tiger sharks’ diet includes everything from jellyfish and sea snakes to stingrays and seals and their habit of snapping up human garbage has earned them the unfortunate nickname “wastebaskets” of the sea.

Sadly, like Caribbean Reef Shark, Tiger Sharks are classified on the IUCN Red List as “Near Threatened”. Their fins are in high demand in Asia for shark fin soup.

In the Dutch Caribbean sharks are protected within the “Yarari Marine Mammal and Shark Sanctuary” and conservation groups are working with local fishermen to reduce catch and by-catch of sharks and to establish a region-wide shark sighting network to learn more about where they live and how we can best protect them.