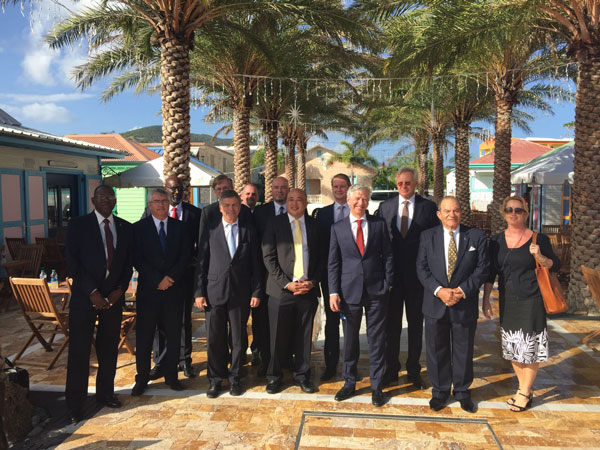 POINTE BLANCHE:—  Dutch Minister of Interior Affairs and Kingdom Relations Ronald Plasterk on Tuesday afternoon visited the Dr. A.C. Wathey Cruise & Cargo Facility where he received a presentation from Port St. Maarten Management.
Port St. Maarten Chief Executive Officer (CEO) Mark Mingo gave an overview of the state of affairs at the port facility and pointed out the importance of job creation for the country due to developments in cruise and cargo. Mingo also explained the compliance processes that are in place under the port’s audit umbrella which are in line with good corporate governance.
The CEO explained how Port St. Maarten contributes to one third of the Gross Domestic Product (GDP) of the country which in turn provides thousands of jobs and generates foreign exchange for the government and businesses.
Mingo also explained in detail about the agreement with Ernst & Young Advisory Services, to perform an Enterprise Risk Assessment (ERA), which will prepare Port St. Maarten’s strategic development for 2016 and beyond, as well as the various financial and operational audits that have been carried out over the years.
ERA is the process of planning, organizing, leading, and controlling the activities of an organization in order to minimize the effects of risk on an organization’s capital and earnings.
Enterprise risk management expands the process to include not just risks associated with accidental losses, but also financial, strategic, operational, and other risks.
The CEO also explained the relationship that exist with the shareholder and how the latter approves the strategic growth module of the port once all relevant information has been provided based on discussions between the port and the shareholder.
The Minister was explained with reference being made to the BREA (Business Research & Economic Advisors) Report, which is a survey-based analysis of the impacts of passenger, crew and cruise line spending, that was prepared for the Florida Caribbean Cruise Association (FCCA) and Participating Destinations, October 2015 edition.

35 destinations took part in the study. They were located in the Caribbean, Mexico and Central and South America.

During the 2014/2015 cruise year, cruise tourism generated US$3.16 billion in direct expenditures, 75,050 jobs and US$976 million in employee wages among the aforementioned destinations.

23.6 million cruise passengers disembarked cruise ships and visited the participating destinations or embarked on their cruise at one of the six homeports over the aforementioned period. These passengers spent $2.45 billion for shore excursions and other goods and services during the 2014/2015 cruise year. Average per passenger expenditures ranged from a low of $42.58 in Trinidad to a high of $191.26 in St. Maarten and averaged $103.83 per passenger visit across the 35 destinations.

An estimated 4.5 million crew members that visited the 35 participating destinations spent an estimated $302 million for goods and services during the 2014/2015 cruise year. Unlike passengers, shore excursions are not a focus of crew spending; rather, crew expenditures are more heavily weighted toward food and beverages, jewelry, and electronic goods. These were followed by spending for clothing and entertainment.

Sint Maarten had the second highest average expenditure of $119.13 per crew visit and the third highest number of crew onshore visits (377,400); Sint. Maarten had the second highest total expenditure among the 35 participating destinations, $45.0 million. In St. Maarten crew expenditures were also concentrated on retail purchases of electronics and jewelry. These were followed by spending for food and beverages and clothing. These four categories accounted for 70 percent of total crew spending in St. Maarten.

The $423 million in direct expenditures, in turn, generated an estimated 9,259 jobs paying $189 million in wage income during the 2014/2015 cruise year. This placed St. Maarten with the highest income impact and the second highest employment impact.
The contributions that the Dr. A.C. Wathey Cruise and Cargo Facility makes to the Caribbean Netherlands BES islands (mainly St. Eustatius, and Saba) was also profiled in connection with shipping of goods; and the concession fee that is paid by the port to the shareholder.
Mingo informed the Minister and his delegation that Port St. Maarten accommodated 1,901,617 cruise passengers in 2015, and is the #1 cruise port in the Caribbean, the second year in a row according to Cruise Fever.net readers who were asked to vote on the best cruise ports in the Caribbean in the 2015 Cruise Fever Fan Awards.
Another important point that CEO Mingo informed Minister Plasterk about was Port St. Maarten’s strategic security plans that are in place in compliance with International Ship and Port Facility Security Code (ISPS) standards of the United Nations International Maritime Organization (IMO), adding that the port works very closely with law enforcement agencies of the country to ensure a secure and safe environment for cruise passengers and crew. This relationship that exists and current port security measures are also in line with cruise line industry security procedures and standards.

At the end of the visit to the port facility, Minister Plasterk and his delegation were taken by water taxi to the Walter Plantz Square for refreshments and to showcase the port’s latest project that highlights cultural and heritage tourism, an avenue that holds great potential for the destination with respect to sustainable development.

The presentation to the minister was supported by senior Port St. Maarten management officials as well as members of the board of supervisors. 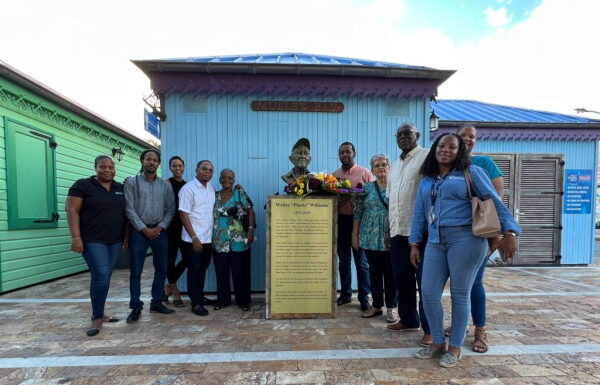