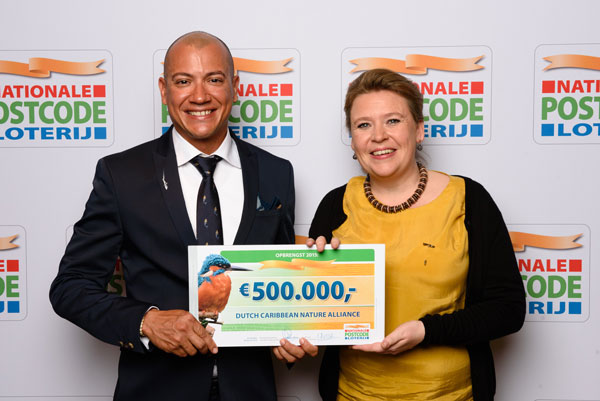 The National Postcode Lottery supports the Dutch Caribbean Nature Alliance and its mandate of Nature Conservation on all islands of the Dutch Caribbean. During the charity gala, the lottery proudly announced that thanks to its 2.7 million participants, who bought more than 4 million lottery tickets collectively, a total of 328 million euros will be distributed to non-governmental organizations in 2016. Keynote speaker at the event was actor and social rights activist George Clooney.

“It was an honor to attend this charity event and to receive the continued support of the National Postcode Lottery in our efforts to ensure Nature Conservation not only on St. Maarten where I am the most active but on all islands of the Dutch Caribbean which we all feel so passionately about. This continued support will allow the Dutch Caribbean Nature Alliance to continue work to safeguard and support nature conservation organizations on all islands, organizations which are often underfunded and work very hard to protect Nature with a minimal of staff,” commented Bervoets.

The pristine nature of the Dutch Caribbean contains the richest biodiversity in the Kingdom of the Netherlands. The diverse ecosystems are a magnet for tourism and at the same time the most important source of income for the islanders. Nature on the islands is unique and important but it is also fragile. The lack of sustainable funding, policy support and adequate spatial planning pose the most significant threats.

The Dutch Postcode Lottery has been raising funds since 1989 to support organizations working towards a fairer and greener world. Fifty percent of the lottery’s annual turnover goes to charity. The lottery has steadily grown to become the biggest charity lottery in the Netherlands and supports 95 non-governmental organizations. Since its founding, the lottery has dispensed over 4.7 billion euros to its beneficiaries.