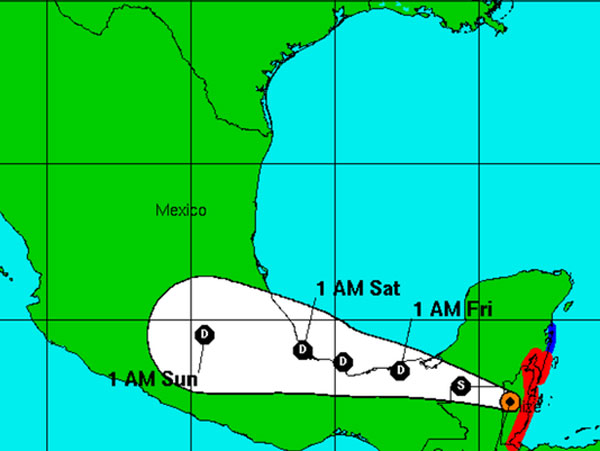 Hurricane Center: Earl weakens to a tropical storm as it moves inland after making landfall in Belize.

Hurricane Earl made landfall in Belize overnight, with sustained winds estimated at 80 miles per hour.

A hurricane warning is in place for Belize and parts of Mexico, though the storm was expected to begin weakening when it moved ashore. The hurricane center says heavy rains will be a danger in southern Mexico through Saturday as Earl crosses the Yucatan Peninsula and the states of Tabasco and Veracruz.

In Belize, the government opened storm shelters and used radio and television broadcasts to urge residents of low-lying areas to move to higher ground.

At 4 a.m. Thursday, the center of Earl was located at 17.3 degrees north and 88.9 degrees west. It was moving west at 15 miles per hour with maximum sustained winds of 75 miles per hour and a minimum central pressure of 982 millibars.

Tropical Storm Earl has been upgraded to a hurricane as it nears the coast of Belize, according to the National Hurricane Center.

At 5 p.m., the center of Earl was located at 17.1 degrees north, 86 degrees west. It was moving west at 14 mph with maximum sustained winds of 75 mph and a minimum central pressure of 988 millibars.

The center of Earl will likely make landfall overnight.

BELMOPAN, Belize – Tropical Storm Earl neared hurricane force Wednesday as it bore down on the Bay Islands of Honduras and the Caribbean nation of Belize.

The U.S. National Hurricane Center in Miami said that Earl was threatening to bring heavy rains, flooding and high winds to Mexico, Belize and Honduras, and was likely to blow past Honduras’ Roatan Island, a popular tourist destination, on Wednesday afternoon.

In Belize, the government opened storm shelters and used radio and television broadcasts to urge residents of low-lying areas to move to higher ground. The shelters were still empty on Wednesday morning, however.

The government’s chief meteorologist Dennis Gonguez, said the storm should begin affecting the country around 6 p.m. local time and will likely make landfall as a Category 1 hurricane.

Long lines of traffic formed at gas stations around the country as residents filled their tanks in advance of Earl’s arrival. Stores were also busy with people buying water and food.

At The Palms Oceanfront Suites in San Pedro on Ambergris Caye, Ana Ico said the hotel began preparing two days ago and gave guests the option to evacuate to the mainland or stay at the hotel. About 12 guests have chosen to stay, Ico said.

“Some of them have decided to stay so what we’re doing is we’re giving them some water, flashlights and informing them as we get updated on the storm,” she said. Other guests chose to move to the mainland.

Belize, Mexico and Honduras issued tropical storm warnings for some areas, and a hurricane warning was issued for part of Mexico.

The airport on diving destination Roatan off the coast of Honduras closed its airport Wednesday as heavy rains moved in.

On Sunday, Earl was a weaker tropical wave but knocked down power lines and started a fire that killed six passengers on a bus in the Dominican Republic.

Late Wednesday morning, the storm was centered about 120 miles (195 kilometers) east of Roatan, with maximum sustained winds near 70 mph (110 kph) and was moving west near 14 mph (22 kph).