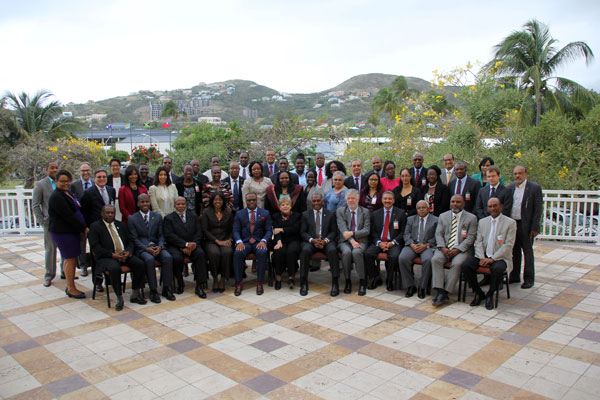 St. Kitts/ St. Maarten:— ECLAC has made a call for the creation of a Caribbean Resilience Fund as part of a debt alleviation strategy based on a climate change swap proposal. “The swap will involve the use of pledged climate funds to write down the public debt of Caribbean countries and create the financing necessary to fund climate change adaptation and mitigation initiatives and investment in green economies, which in turn will be administered through a Caribbean Resilience Fund”, Alicia Bárcena, ECLAC’s Executive Secretary, said during the fourth Caribbean Development Roundtable (CDR), held in Basseterre, Saint Kitts and Nevis on 21 April 2016.

This proposal stems from the recognition that while Caribbean countries are among the most highly indebted countries in the world. The subregion’s high debt dilemma was linked to external shocks, compounded by the inherent structural weaknesses and vulnerabilities confronting Caribbean SIDS with limited capacity to respond. Many Caribbean countries belong to the middle income category, which constraints their access to concessionary funding.

Addressing government officials and representatives of numerous regional and international organizations during the opening of the CDR, the most senior authority of the Economic Commission for Latin America and the Caribbean (ECLAC) presented a proposal on debt for climate adaptation swaps, which detailed a strategy for the growth and economic transformation of Caribbean economies, in light of the heavy debt burden being faced in the subregion.

Bárcena explained that resources from the Green Climate Fund (GCF) could be used to write down Caribbean public debt from multilateral and bilateral lenders, and to buy back debt from private creditors at a steep discount. With the newly found fiscal space, Caribbean governments would then make payments into theCaribbean Resilience Fund, which would in turn be used to finance resilience capacity building in climate change mitigation and adaptation, and invest in green economies.

ECLAC’s debt for climate adaptation swaps proposal calls for donors to use pledged resources from the (GCF) to finance a gradual write down of 100 per cent of the Caribbean Small Island Developing States’ (SIDS) multilateral debt stock held at various multilateral institutions as well as the bilateral debt stock of Member States.

Responding to Bárcena’s presentation, the Honourable Vance Amory, Premier of Nevis, Minister of Finance, Nevis Island Administration and Acting Prime Minister of Saint Kitts and Nevis affirmed that “one cannot downplay the potential negative impact of climate change on our fragile economies and our ability to provide future economic growth”, and in this regard underscored that “we have to put together a cohesive approach so that we can have the desired response to the need to pay our debt”.

Discussions during the CDR also focused on prospects for pursuing the achievement of the Sustainable Development Goals (SDGs) in the Caribbean. Executive Secretary Bárcena emphasized that the current debt overhang and environment of fiscal constraint makes it almost impossible for Caribbean governments to make the desired public sector investment in green industries, which would stimulate growth and promote economic transformation in the Caribbean. The debt for climate swap proposal is intended as a strategy to create the fiscal space for such public investment.

Participants in the Roundtable highlighted a number of critical issues that increased the vulnerability of Caribbean SIDS, notably climate change and a range of social challenges, including population ageing, non-communicable diseases (NCDs) the persistence of poverty and inequality, high youth unemployment, the loss of skills through emigration, and low technological capacity. These concerns they affirmed would have to be addressed through SDG implementation.