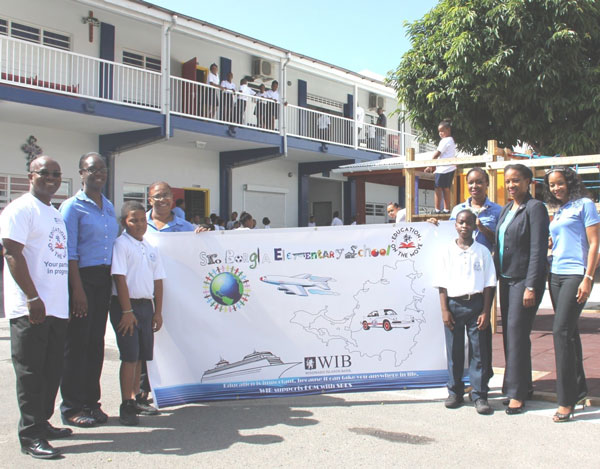 PHILIPSBURG:— Minister of Education, Culture, Youth and Sports, The Honorable Silveria Jacobs officially launches the EOM banner campaign along with Education OnThe Move (EOM) project manager Angelique Martis-Romou and partners the Sister Borgia School & the Windward Islands Bank.
The Education on the Move Campaign is an educational campaign whereby all educational stakeholders and the community of St. Maarten will be involved. The campaign’s objective is to get everyone engaged & talking about the importance of Education & to see & envision the benefits it will harvest.
The Banner campaign is another arm of the EOM campaign. The idea behind the banner campaign is to get every school, all 27 schools on the Dutch side of the island to design a banner that depicts Education on the Move and then a business could offer their support by purchasing the banner for the school. The banner exhibits that the school and the business is on the move with Education. The school will then exhibit the banner at the entrance of the school so that the general public can see the EOM banner and its depiction of Education on the move.
The first school to complete their banner was The Sister Borgia School and the Windward Islands bank was the first business to support this school’s banner, which shows that they are not only our partner in progress but also that they are on the move with Education.
The banner for Sister Borgia School was designed by Student, Devonte Hughes and he was assisted by teacher Marjorie Breinburg and teacher Francesca Letang, who digitalized the banner. Student Pedro Rosario wrote the tag line. The banner not only shows that Education can take you anywhere in life but the tag line on the banner also reads “Education is important because it can take you anywhere in life”.
The iconic part of the campaign is the t-shirt and the banner campaigns, which are geared towards everyone seeing and getting familiar with the term EOM.
The t-shirt campaign was launched on the 3rd of June with GEBE being the first company to show their support for the EOM campaign by having their employees wear the EOM t-shirts every Friday to show their support in the month of June.
The Windward Islands bank will be the second business to join the t-shirt campaign and will start wearing their shirts on the first working Friday in July which is the 8th of July.
The EOM campaign has numerous focal points which are: