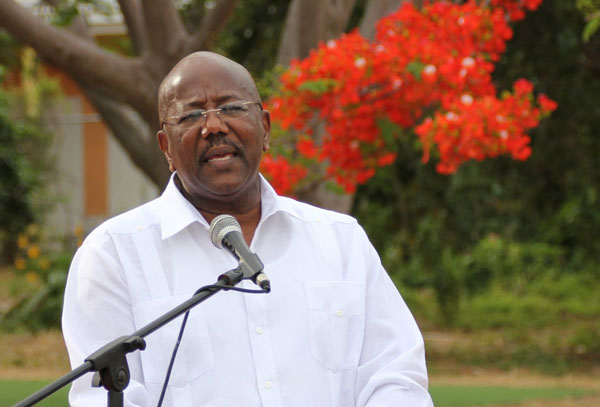 Good afternoon.
As we gather here once again on these haloed grounds of the Emilio Wilson Park, with the flamboyant tree or July tree in full bloom, we should remember when this place was a plantation where, according to some accounts, One Tete Lokhay, that female freedom fighter of immortal memory, came ransacking for food to feed some of our enslaved ancestors she had helped escape into freedom.

We all know the price she had to pay for her courage and bravery: they cut off one of her breasts to deter others from following in her footsteps.

She may not have saved as many enslaved ancestors as Harriet Tubman did with the Underground Railroad, however, I’m sure like Tubman, she could have saved many more had they realized they were enslaved.

Emancipation is about freedom and freedom is the birthright of every human being. But we also know that freedom is not free.
Frederick Douglass said, “If there is no struggle, there is no progress. Those who profess to favor freedom, and yet deprecate agitation, are men who want crops without plowing up the ground, …………
they want rain without thunder and lightning. They want the ocean without the awful roar of its many waters.”
Our ancestors knew that they had to struggle for their freedom, and they never gave up the struggle. They ran for their freedom as the example of the Diamond Estate 26 clearly demonstrates.
I, therefore, commend the organizers of the Run for Freedom, which is a chilling re-enactment of their escape.
Those who participated in that event were made to remember when our ancestors braved the darkness, the dogs, and the bullets of the slave-owners to gain their freedom.
We may not be able to recall in vivid details the conditions under which our ancestors were subjugated.
The brutality, savagery, inhumanity and degradation that characterized Slavery was such that one of the eye-witnesses and chroniclers of that evil institution, Bartolomeo de las Casas, wrote that nobody in the future would be able to believe it.
And even with TV series like Roots, and other movies about Slavery, today it is still beyond our imagination and perhaps even beyond our comprehension.
However, remember we must, so that we can guard against it from ever happening again.

Remember when Emancipation Day was not a public holiday on St. Maarten? That was just a few years ago. We must pay homage to all those who fought to ensure that we could celebrate this day as a public holiday.

However, the idea of a public holiday was and is not meant as just another day off from work, but as a day of reflection, a day to remember when our ancestors had to endure the ignominy of Slavery, of forced, unpaid labor, the consequences of which are still very present with us today.
This is one of the reasons why Emancipation Day cannot be divorced from the ongoing international initiative for reparatory justice.
Because we remember when at Emancipation it was the slave owners who got handsomely compensated for the so-called loss of their properties.
Reparatory justice, as championed by CARICOM, is therefore an initiative I personally support and hope will form an integral part of our celebration of Emancipation Day.
There must be a reason why St. Maarten is the first and so far the only territory within the Kingdom of the Netherlands where July 1st is observed as a public holiday even though the Emancipation Proclamation was issued on the same date for all the Dutch possessions.
This reason has to do, in my humble view, with our heritage of struggle and independence of action. That is why those who may write us off in times of adversity do so at their own peril for they do not know the mettle we are made of.
Recordar es vivir, the Spanish say. To remember is to live. This means that if we do not remember, we do not live.
Put differently, life itself is a series of memories we build on as the foundation of our very existence.
If, as our own Lasana Sekou says, we become “memory-less”, in other words, if we lack or give up that ancestral memory, that foundation which is meant to infuse us with life and support us through life, then we would remain for all intents and purposes, dead.
Therefore, to those who feel uncomfortable talking about Slavery, claiming it is something of the past and therefore we should not dredge it up, but leave the past alone; to those who say “massa days are done” and yet complain that St. Maarteners are second class citizens in their own land, to them I say, remember the words of Marcus Garvey:
“A people without the knowledge of their past history, origin and culture is like a tree without roots. “
That rootedness is essential for our continued existence and survival as a people because to re-member implies reintegration into a community of shared memories that constitute the living history of its people.
It is a renewal of our membership of that community or, in fact, a piecing together of that community in what we may consider today an enterprise in nation building.
But how do we build that nation if we fail to remember when our forefathers had faced more daunting challenges and found their own solutions that served them well, whether it was in the way they built their homes to withstand the forces of Nature, or pulled their resources together in jollifications in the construction of those same homes?
Ladies and gentlemen, I do not intend to take you on a walk through Memory Lane. Emancipation Day is not about nostalgia.
We are not celebrating a proclamation issued grudgingly, full of condescending remarks that was meant to mark the official end of Slavery.
What we are celebrating is the indomitable spirit of our ancestors who knew that freedom is not a royal gift but the inalienable right of every man and woman put on the face of this earth by God.
It is that uncompromising spirit of our forefathers who knew that not to fight for freedom is to acquiesce in our own enslavement that we are here to honor today.
They knew, as did Abraham Lincoln, who said that “those who deny freedom to others deserve it not for themselves.”
It makes me wonder, therefore, what it would take to issue an official apology for Slavery which the whole world agrees is among the most hideous crimes against humanity committed by those who would today want to teach us moral lessons about integrity.
Or is it that they believe it is not worth apologizing for? I wonder.
Then I remember that on occasions like this, we would often sing Bob Marley’s “Redemption Song,” stressing those immortal words of Garvey, “Emancipate yourselves from mental slavery, none but ourselves can free our minds!”
Do you remember when that used to be our Emancipation Day anthem?
One thing for sure, and I will end with this, we should never, never allow ourselves to forget that the Emancipation project is yet to be fully realized and indeed will not be completed until we emancipate ourselves from mental slavery and embrace independence as the only way forward, if we are to establish a just society in which all of us can thrive and in which our children and our grandchildren can take their rightful place as heirs of hardworking, self-reliant, proud St Maarteners who built this island through their blood, sweat and tears.
Congratulations to the organizers. Congratulations to the people of Smartin.
Happy Emancipation Day! God bless you and God bless our beloved island, St. Maarten.
I thank you.